Karachi’s art lovers have yet another gallery to visit

KARACHI: When you step into the recently launched chapter of the ArtScene Gallery, the colours, combinations and contrasts will leave you enthralled.

The current exhibition, which is also the first at this new chapter, exhibits the works of 45 artists. It has been titled ‘Karachi Art Scene 2014′ because, as curator Muhammad Ramzan puts it, the display attempts to convey the contemporary art scene of Karachi by focusing solely on the city’s artists.

The tension in Javed Qamar’s brightly coloured oil on canvas calligraphy catches the attention of the viewer at first glance. The red and green contrasts are beautiful and powerful. Different names of Allah are inscribed on a globe in a well-developed perspective. The composition speaks of God’s omnipotence: He is all over the globe in different forms. Interestingly, the most distinguished names in the painting were ‘Al Musavir’ and ‘Al Bari’. The artwork speaks of the attributes of God that the artist feels most relatable to.

Moving on, you find two of Gulgee’s excellent masterpieces. The thought process behind his works is deeply intricate. In one of the works, the word ‘Allah’ was inscribed. A closer inspection shows that the colours used are typical of a rainbow. Gulgee’s Sufi inclinations come to surface in his works.
Saeed Qureshi’s abstract art pieces are quite gripping as well. The texture of the oil on canvas painting is beautiful as you can see the strokes rising from the surface. The colours are vibrant and the tension is captivating.

Female figures dominate many artworks. While SM Naqvi uses the woman as a symbol of love and beauty in a dreamy ambience, Raja Changez Sultan seems to tread upon quite the opposite journey. Naqvi’s woman is definitely outlined in bright colours. In contrast, Sultan’s painting of three female figures in blue and white tones seems gloomy. The faces are sad and devoid of hope with the eyes closed.
A similar contrast is provided by the adjacently positioned paintings of Abrar Ahmed and Chitra Pritam. While Ahmed focuses on women’s jewellery serving as an enhancement of their beauty, Pritam seems to use the motif to comment on the bondage of women in any literal sense.

Maqbool Ahmed is also inspired by the female form. However, his play with hues leaves his images blurry and incomplete. Nevertheless, this play is skilful and leaves the viewer wondering about the images. In particular, the diminished expressions on the faces have a great effect on the viewer.

The female form, alongside that of a pigeon, reverberates throughout Jamil Naqsh’s work. Using pencil on paper, Naqsh has drawn a juxtaposition of the woman and pigeon which is ripe with symbolism. His works seem to cherish the beauty of the woman figure, which is often expected to meet certain standards. Naqsh, however, seems to be at peace with the full figure of the woman as is evident in his works. The woman symbolises fertility and love while the pigeon has similar connotations of peace and harmony. His focus on and contentment with the natural form of the woman is what intrigues the viewer who is often not used to such appreciation of the natural form.

Pigeons serve as the motif on Irfan Ahmed’s 48×60 inches canvas. However, his oil on canvas works employ different techniques and are totally the reverse of Naqsh’s toned down works. While Ahmed also uses the colours black and white, his works are more vibrant and vivid. However, there is juxtaposition in his works, too. The white and coloured pigeons appear to signify truth and lies. “I consider that art is a lie that makes us realise the truth, or at least, the truth that is given to us to understand,” says Ahmed, according to the catalogue.

When it comes to truth, one is often left to wonder what is real and what is not. Akram Spaul’s works, though very simple, leaves the viewer pondering over the said question. His surrealistic oil on canvas paintings show images that look just like real life images. But the viewer knows that it is not real. This knowledge takes the viewer into a realm of wonder in which he is left to reflect on the realities of life.
The artworks will be on display till October 18. 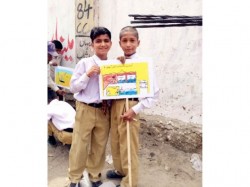 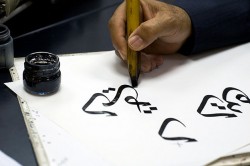