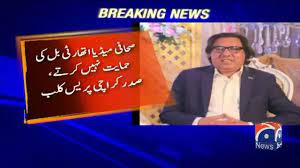 Chaudhry had claimed in a statement that all press clubs of the country favour the bill.

Jamili, in response to this today, said Chaudhry’s statement could not be further from the truth, since he does not support the bill.

Meanwhile, Lahore Press Club President Arshad Ansari also demanded that the proposed bill be revoked, terming it to be “against media freedom”, “unconstitutional”, and “oppressive”.

In a statement issued by the press club, Ansari said that the bill is “another tactic for the government to tighten its grip on the media” and to “constrain it”.

“The Lahore Press Club stands in solidarity with APNS, CPNE, PBA and PFUJ on the matter,” the statement said.