KARACHI: From ‘Saw­anli Saloni’ and ‘Dil Dil Pakistan’ to his soulful naats, Junaid Jamshed was on everyone’s mind on Friday as a hashtag with his name was one of Pakistan’s top trends for the day.

The late singer was among those who died aboard a PIA flight which crashed near Havelian en route to Islamabad from Chitral on Dec 7, 2016.

Sharing a photograph from their childhood, Mr Jamshed’s brother Humayun tweeted: “Miss you brother. I pray that Allah joins us together again in Jannah. Ameen.”

Twitterati shared old photographs, songs and interviews of the late singer and prayed that he was resting in peace.

The government tweeted from its official account (@pid_gov) and said: “Iconic #Pakistani singer turned religious scholar #JunaidJamshed is being remembered on his death anniversary. His song ‘Dil Dil Pakistan’ was ranked third among top 10 songs according to #BBC World Service in 2003 and was awarded Tamgha-i-Imtiaz in 2007.”

Sharing a video of a song he sang for the deceased, singer Shehzad Roy said: “I don’t know how I did it. Would be difficult to do it again. We will miss you #JunaidJamshed.”

Morning show host Sanam Baloch tweeted an old photograph with the late singer and said: “2 years passed since we have lost a great talent and a great personality #JunaidJamshed.” 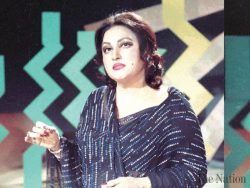