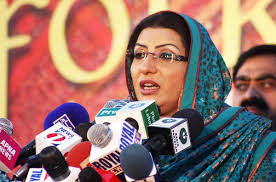 LAHORE: Special Assistant to Chief Minister on Information Dr Firdous Ashiq Awan has said that the Punjab government is bringing a new media policy in which views of the journalists will be taken into consideration while the proposal to construct media tower and training academy for the journalists will be presented in the next ADP.

She expressed these views while addressing the Federal Executive Council of Pakistan Federal Union of Journalists (PFUJ) at the Lahore Press Club on Saturday. She further said the government provided financial assistance to journalists who became the victim of Corona pandemic. “We are committed to resolving longstanding issues and problems of the journalists on priority basis,” she added.

According to her, while the government is serious in resolving the problems of media, journalists should also acknowledge and promote the government’s point of view. The PTI government is ensuring freedom of expression and journalists have the right to say or write whatever they want in the public interest, but they should also keep in mind the interests of the state. It should not be neglected while highlighting the interests of the people.

Dr Firdous said the former governments used public money for self-projection in the shape of advertisements even without the budget approval, but the PTI government does not want to repeat the mistakes done by the previous rulers. “The incumbent government has adopted a systematic method of advertising,” she added. She said that flower petals were showered on Shahbaz Sharif during his appearance in NAB and an accused was presented as a hero. It is very unfortunate that in our society, people convicted by the courts flash victory signs.