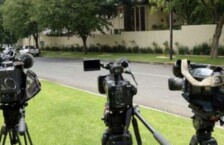 ISLAMABAD: The journalists’ community on Monday vowed to protect the freedom of expression at all costs and that no media organisation or channel will be allowed to be banned.

The Karachi Union of Journalists held a meeting of senior journalists to discuss and find a solution to the prevailing precarious situation faced by journalists following the media crisis that has arisen recently.

The members of the meeting were of the opinion that the act of disconnecting of any channel or changing its position on the cable is against Pemra laws and is also against the freedom of press and freedom of opinion as enshrined in the Constitution of Pakistan.

The meeting was of the opinion that some channels ran some video clips which antagonised the sentiments of a large section of society. But some other channels aired those clips again and again which resulted in further aggravating the situation, inciting people and thus putting the lives of journalists under threat.

The meeting agreed that on the issue of a particular video clip, a host and Geo TV Network have already tendered an unconditional apology, and this apology was being aired constantly.Most of the Ulema and religious scholars have said that after this apology, the matter should be defused and shelved. The meeting also endorsed this opinion.

A resolution was passed that no media organisation or channel will be allowed to be banned; PFUJ and KUJ will resist any such move and will hold countrywide demonstrations.It was also strongly reiterated that the KUJ and PFUJ stood by all working journalist, especially of Jang and Geo, who were vulnerable. Steps should be put into place to protect the lives and property of all journalists across the media.

In the meeting, all the leaders asserted that any decision to impose curbs on the freedom of opinion would not be accepted, nor any idea of closing down a TV channel, newspaper would be seconded.

Condemning the timid act of an assault on Hamid Mir in the strongest terms, all the journalists said that the attack was tantamount to a blow to journalism, democracy and personal freedom. PFUJ President Afzal Butt said that there is no divide among the Pakistani journalists as every journalist represents Hamid Mir.

The participants remarked that in democratic societies, journalists were considered as the eye and ear of the society. They added that they would keep rendering sacrifices for the freedom of expression of the masses.They added that the unpleasant voices labelling others as traitors and demanding closure of certain organisations were not among the characteristics of civilised societies.

The journalists, denouncing the controversial programme aired on television channels, termed them against the social values. They also noted that the apology made by Geo and the act of sacking entire team of the programme was a good omen. They proposed that a special committee, comprising senior journalists, should be formed to play a role in the backdrop of the prevailing circumstances.