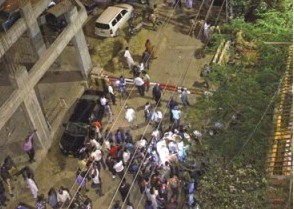 PESHAWAR: Condemning the terrorist attack by a political party’s workers on a private TV channel office in Karachi, the journalist community on Tuesday held a protest demonstration here outside press club.

The protesting community demanded the federal and Sindh governments to immediately arrest the culprits involved in the inhuman terrorist attack and award them exemplary punishment. The protesting media persons led by President Khyber Union of Journalists (KhUJ) Nisar Mehmood, General Secretary Tariq Afaq, Peshawar Press Club President office-bearers Nasir Hussain and Yousaf Ali were holding placards and banners inscribed with slogans against the government for failing to give protection to journalists and media organisations.

The infuriated protestors also chanted slogans against the Sindh and federal governments.
Addressing the protesting community on the occasion, they said that the recent attack on ‘Express’ office in Karachi was condemnable and a cowardly act of the terrorist political party in the port city. It was a blow to the freedom of press and tantamount to stop journalists to disseminate truth, they said.

They protesting leaders also said that Sindh government was badly failed to give protection to journalists in line of their duty. These terrorists organisation couldn’t stop us from writing truth.

The demonstrating journalists demanded both the federal and Sindh governments to come up with their due responsibilities to give protection to media workers and their organisations and award punishment to culprits involved in this heinous act.