Journalists play a vital role in a society, says Inspector General of Police 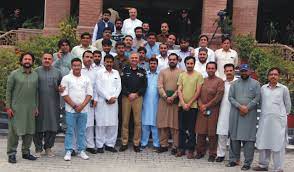 IGP added that crime-related journalists and police are always on the front line against terrorism and due to their sacrifices peace has been restored in the province. While talking about Jani khel sit-in, he said that the things are in final stages and the issue will be resolved soon.

Meanwhile, a delegation of business community called on IGP Khyber Pakhtunkhwa under the chairmanship of Haji Muhammad Afzal Ashraf, former president of Sarhad Chamber and under the patronage of Habibullah Zahid, president of All Pakistan Hotel and Restaurant Association, discussed in detail the issues facing the business community. DIG and AIG were also present, occupation mafia, ransom calls and security issues were discussed, and exchange of SHOs and experienced officers were requested to be brought forward.

The business delegation also spoke about the rise in street crime, noting that the rising street crime in various parts of the country has left the business community vulnerable to rising thefts and robberies. They are suffering from severe anxiety due to the incident. IGP assured the delegation that protection of life and property of traders is the top priority of the police and action plan has been formulated for the protection of traders.

The IGP has said that the business community will work together to control the law and order situation in the shopping malls, adding that the rise in crime will not be tolerated under any circumstances. Ghulam Bilal Javed, Haji Abdul Naseer, Khalid Gul Mohammad, Shakirullah Khan and other leaders participated in the discussion. The delegation apprised the Additional IG of issues related to police in different markets of Peshawar. The meeting emphasized on better relations, meetings and working relationship between the businessmen and the police so that the law and order situation could be improved as a result of mutual cooperation. Speaking to the business leaders on the occasion, the Additional IG said that the police and the business community are in cahoots with each other, without the cooperation and guidance of the public and business community, it is very difficult for the police to tackle the challenges in the area. All district SSPs, DSPs and police station SHOs are directed to stay in direct touch with traders’ organizations and civil society. So that the atmosphere of law and order can be improved through a better working relationship in the areas and complaints related to the police can also be eliminated. The business delegation thanked the Additional IG for his commitment to take immediate steps to resolve the issues and for his full cooperation.