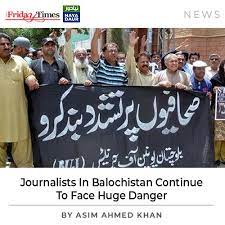 Data compiled by the Pakistan Press Foundation (PPF) shows that a total of 21 journalists have been killed in Balochistan since 2002.

Balochistan is considered the most dangerous province in the country for journalists. It is generally believed that during coverage of violent incidents, journalists are under great pressure from the management of news channels to break news, pressurizing them to take unnecessary risks.

Balochistan is a conflict zone, where journalists are targeted frequently. Due to the law and order situation, most of the media networks have their offices in Karachi or Islamabad.

Daniyal Butt, bureau chief of News Network International (NNI), who reports on militancy, said that investigative reporting is extremely difficult in Balochistan. “Seeing the tense situation in Balochistan, I have realized that safety precautions must be considered while covering news”

Irfan Saeed, President Balochistan Union of Journalists, said that two cameramen, Mehmood Khan and Shahzad Khan, were killed in the August 8, 2016, suicide attack on Civil Hospital in Quetta — “Joint Media Action Committee designed SOPs for mediapersons, which recommended that media teams will visit the terror site after the security forces have cleared the area. But journalists began to violate this precaution soon after.”

Saeed said that while it is the responsibility of journalists to be careful in performing professional duties, the owners of media houses should prioritise their safety as well.”

Senior journalists think providing security to mediapersons is only part of the solution – because, with the exception of Irshad Masoi’s murderers, none of the other killers of journalists in Balochistan have been arrested.

The government of Balochistan is often blamed for failing to provide security to the journalists. According to Farah Azeem Shah, spokesperson for the Balochistan government, “The government has made a security plan for journalists, media networks, and newspaper agencies in the province. The government will help them in every possible way, including giving them security through Frontier Corps and Police.”

However, senior journalists point out that relying on the government for security has its own drawbacks. They think providing security to mediapersons is only part of the solution – because, with the exception of Irshad Masoi’s murderers, none of the other killers of journalists in Balochistan have been arrested.

Senior journalist Syed Ali Shah, Editor Quetta Voice, said, “In the last few years, more than two dozen innocent journalists were killed but their killers have not been arrested. It shows how serious the government is in protecting the journo community.”

Nasir Zaidi, former General Secretary of Pakistan Federal Union of Journalists (PFUJ), said that attacks on journalists have not stopped — “No progress has been made in such cases.”

Saeed said the Provincial Assembly of Balochistan has been unable to enact the journalist protection act.