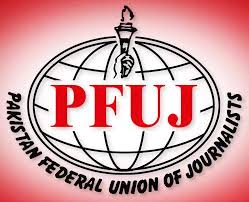 LAHORE: A delegation of leading journalists, including Pakistan Federal Union of Journalist (PFUJ) President, Rana Azeem; Secretary General GM Jamali, office bearers of PUJ and Apnec called on Federal Minister for Information Fawad Chaudhry here on Sunday and presented a memorandum with regard to journalists’ issues.

PFUJ Secretary General G M Jamali presented the memorandum of grievances with regard to the journalists’ issues. PFUJ President Rana Muhammad Azeem said that at the moment the journalists’ community is suffering from multi-dimensional problems, and it has pinned its hope on the incumbent government.

Rana Azeem said that journalists have much expectation from the present information minister to address their grievances. The leader of the PFUJ has highlighted the issues like removal of journalists from the media institutions, wage board, empowering the judge of ITNE, enlisting electronic media journalists in wage award, setting up journalists training academies in all four provinces and health and life insurance for the journalists.

On this, the information minister said that a media university will be established in collaboration with the Pakistan Broadcasting Corporation and Information Ministry.

Fawad Chaudhry said the PTI government has eliminated censorship on the official media. He said the government is committed to curb monopoly in advertisement and it will formulate an independent transparent policy for this process. The minister said that the government is going to issue health insurance card to the journalists fraternity with a slab of five and a half lakh on the pattern of KP.

He said that Imran Khan led PTI government would solve the issues of journalists with the close cooperation of the PFUJ. The Government is acting upon a comprehensive strategy to further strengthen the departments, he added. Fawad Chaudhry said that the Pakistan Media University will be established in Islamabad for the promotion of art, language and culture.

On this occasion, PUJ President Shezad Butt invited the minister to his office and assured him of fullest cooperation as far as the assistance of journalists union is concerned.