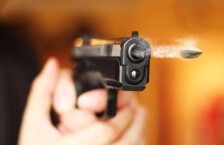 MUZAFFARGARH: A journalist was killed by unidentified suspects here on Tuesday night at Qasba Gujrat, some 20 kilometres away from the city.

Malik Nizam Tani, a correspondent of an Urdu daily, was on his way home when some suspects fired on him. He was shifted to Gujrat Rural Health Centre where he succumbed to his injuries.

Sources said the 28-year-old journalist had been receiving threatening calls for some time.

Police have registered a case against unidentified suspects.

On Wednesday, his funeral was held at Qasba Gujrat and he was laid to rest at local graveyard.