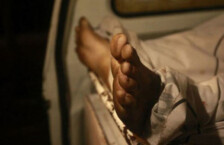 Hyderabad: A journalist was found dead in his flat within the jurisdiction of the Cantonment police station on Saturday. Ilyas Warsi was associated with the daily Kawish. He appeared to have been hit with some blunt object on the head. He was in his mid 50s.

His son Hasnain informed the press club manager that his father was not attending his call on his mobile phone. He reached the flat located in Al-Rahim shopping plaza on the third floor. He along with a friend opened the door only to find his father dead. Two almirahs in another room were found opened. Police shifted the body to Liaquat Univ­er­sity Hospital city branch.

The Nation: Journalist Ilyas Warsi has been killed: SSP