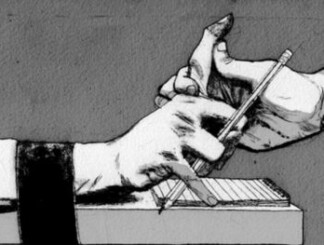 WANA: Attacks on journalists and their family members are yet to stop in the militancy-affected tribal areas as unidentified people tried to target another tribal journalist in South Waziristan Agency on Sunday night, but, luckily, he escaped unhurt.

Unidentified people planted explosives to the main entrance of the house of tribal journalist Zafar Wazir in Dabkot village, four kilometers west from Wana, the headquarters of South Waziristan.

The explosives went off at around 12 midnight and blew away the main gate of the house and caused serious damage to two rooms and structure of the building.“I was not at home when the blast took place as I had taken my brother to a doctor in Dera Ismail Khan. A portion of our house has been damaged but luckily all my family members remained safe,” Zafar Wazir told The News by phone on Monday.

He said neither he, nor his other family members had any enmity with anyone, therefore, he said he had no idea about perpetrators of the attack.“I never received any threat therefore I cannot blame anyone,” he said.

He works for Pakistan’s lone Pashto language television channel AVT Khyber and Urdu language TV channel Dunya News from his hometown Wana.Thirteen tribal journalists have been killed and a number of others injured in the Federally Administered Tribal Areas (Fata) since the launch of so-called war against terrorism in 2004.

Tribal sources in Wana told The News that Zafar Wazir had recently done an investigative report on alleged corruption of Rs120 million in funds of Musa Neeka Public School in Wana and the Agency Headquarters Hospital in Wana by the political administration of South Waziristan.

The school has been built in 1985 and is being run through funds collected by the political administration on fruits and vegetables exported by the Ahmadzai Wazir tribesmen to settled districts of the country.

The Ahmadzai Wazir tribal elders have been complaining about massive corruption in funds meant for the school by the successive political agents.They have several times demanded an impartial inquiry into the alleged embezzlement in the school fund but none of the governors in Khyber Pakhtunkhwa were able to order probe and satisfy the protesting Wazir tribesmen.

Some tribal elders, however, said the Peshawar High Court (PHC) recently took notice of complaints of the Wazir tribesmen and ordered the National Accountability Bureau to probe the alleged corruption in the school funds.