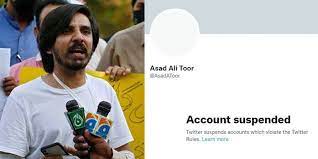 Asad Toor only came to know about the suspension when he realized that his Twitter account was showing zero (0) followers and followed accounts on Wednesday evening. “I asked some friends if they could access my account and that’s when I came to know that the account was suspended”, he told Naya Daur-The Friday Times.

Pakistan government often reports journalists’ tweets to Twitter, demanding action against these accounts and many journalists have complained about this in the past as well. Naya Daur Media itself has received intimation emails from Twitter Support. “In the interest of transparency, we are writing to inform you that Twitter has received a request from Pakistan regarding your Twitter account, @xyz, that claims the following content violates the law(s) of Pakistan”, emails read.

Lawyer and journalist Reema Omer had also received a similar notice in 2019. Fawad Chaudhry, the information minister, had denied government’s role in reporting her tweet. “Why would the government question an academic debate”, he had said. Earlier, journalist Mubashir Zaidi had also complained about receiving a similar notice from Twitter for his tweet when he had asked about the status of slain SP Tahir Dawar’s murder inquiry.

However, Asad Toor’s account suspension is unique since he wasn’t even informed by Twitter. Asad Toor has worked for various TV channels in the past. He’s also reported extensively from Supreme Court for Naya Daur Media and for his own Youtube channel. Earlier this year, he was beaten up by unidentified men. The inquiry of the incident is still pending.