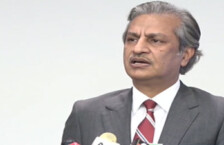 Mr Alam in some of his recent tweets criticised the establishment for interfering in politics.

The FIA summoned him on a complaint filed by a lawyer who accused him of anti-state rhetoric.

He, however, challenged the summon in the Islamabad High Court (IHC). In a petition, he contended that the FIA summoned him without providing details of the complaint.

He said the summon was issued even after the date on which he was supposed to appear before the investigation officer.

He termed the summon mala fide and requested the court to scrap it.