Job data bank will be set up for unemployed journalists: Firdous 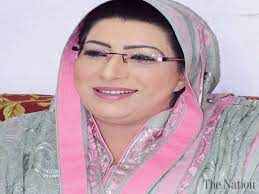 Lahore – Special Assistant to the Chief Minister on Information Dr Firdous Ashiq Awan has said that government considered media as an important pillar of the state and journalists were important part of every democratic government.

Punjab government-provided financial assistance to journalists who became victim of corona pandemic. The operation against all the illegal occupants and land mafias in the Journalist Colony were the responsibility of the government.

These views were expressed by Special Assistant to CM while addressing a luncheon ceremony organized in the honor of the newly-elected office-bearers of Lahore Press Club here on Saturday.

Talking to media, Dr Firdous Ashiq Awan said that welfare of journalists was an important part of the government’s policy and promises made with the journalists would be fulfilled. She said that the scope of journalist colony would be extended to divisional and district level and lands are being identified for the said purpose in different districts. She said that a job data bank would be set up for the unemployed journalists and the government was including journalists’ on priority basis in Universal Health Card programme. The special assistant said that the Punjab government under the leadership of Chief Minister Usman Buzdar was pursing the policy of equal development in the province. The agricultural policy of the government reflected aspirations of small farmers, she added. She said that migration from rural areas to big cities had exacerbated problems but a special planning was being made for uniform distribution of resources to resolve these problems.

She said that the government would consider media’s positive criticism of its policies but asked journalists to inform the people about development schemes being executed by the government in line with the premier’s vision of making Pakistan a prosperous country.

Responding to a question, she said that hopelessness was evident from Maryam’s face after the Jati Umra meeting. She said that the ‘Calibri Queen’ should learn to stand on her own feet instead of relying on others. She said in order to become a leader one had to negate himself/herself and if Maryam wanted to become a leader then she should come out of her palace and try to understand problems of common people. The dream of the ‘Calibri Queen’ was shattered by Bilawal and PPP, she further said.

Dr Firdous said that Pakistan was trying to overcome the problems faced by the country but the opposition instead of supporting the government was creating political instability and promoting anti-state narrative. Commenting on CCPO’s removal, she said that the PTI government believed in practically serving the masses and those who couldn’t serve had no place at least in this government. She said that PPP wouldn’t sacrifice government in Sindh. PDM was serving on anti-state agenda by making institutions controversial, she added. She that the government was ready for a dialogue in public interest but NRO would not be given to anyone.