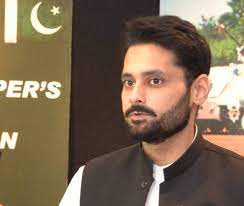 The Karachi Press Club (KPC) on Sunday placed a ban on Advocate Jibran Nasir from entering the club for continuously pressurising journalists for favourable coverage of certain developments.

In a statement, the KPC executive body – including President Fazil Jamili and Secretary Rizwan Bhatti – said that the practice of coercing journalists wasn’t befitting for any honourable individual.

The office-bearers said that the KPC has always provided a platform to anyone wanting to express their stance.

However, they added, Nasir took a harsh tone with journalists earlier this month, later apologising for the same.

The advocate has now resorted to the same attitude at the court in order to coerce the media persons for favourable court reporting, the office-bearers added.

The KPC cited complaints from several senior court reporters over Nasir’s intimidating acts, going as far as expelling them from the courtroom during the hearing of the Dua Zahra case.

The club also highlighted that the advocate had filed a contempt of court plea against its legal committee secretary Bilal Ahmed for simply stating facts and condemned the act.

Expressing solidarity with the court reporters, the club announced to become a party in the case and raise its voice for the journalists.

A copy of the notification available with The Express Tribune