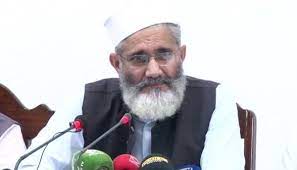 LAHORE: Jamaat-e-Islami (JI) amir Sirajul Haq asserted that his party believes independent media and freedom of expression are the key instruments for the development of a democratic society and put the country on a path of progress.

Addressing the participants of the central media workshop at Mansoora on Sunday, he said different governments in the past practiced arm twisting of the media by putting financial curbs, physical threats and using other tactics to portray themselves positive among the masses.

The PTI, he regretted, had unfortunately outrun the previous governments by curbing media freedom and imposing censorship using various methods. For three years, he said, the government tried to promote a culture of self-censorship in media with the threat of curtailment in advertisement. Incidents of torture, detention and expulsion of journalists, he regretted, witnessed frequently and were on the rise over last couple of years. These tactics, he said, could never be a norm in a healthy democratic society.

“A society that claims to be running on Islamic principles is ready to embrace criticism and adopt all positive things. The JI is trying hard to achieve this goal. We want to transform Pakistan into a welfare state where law would be equal for every citizen,” he said.

He asked the JI workers to use social media to spread the message of Quran and Sunnah in the society. Focus on their own message and avoid unnecessary criticism on others, he urged the participants, also asking them to respect the persons affiliated with the media industry.

To a question, he said the government machinery was used in AJK election and made the results in favour of the PTI. He said the JI wanted electoral reforms and elections should be held on the basis of proportional representation. He said the JI would contest election on its own flag and symbol.

To another question, he said the JI was organizing youth and would hold the All Pakistan Youth Convention at Minar-e-Pakistan in near future. He said the government was sole responsible for inflation and unemployment and it was following the IMF policies blindly, ignoring the public interest. He said the JI believed in the power of vote and wanted a peaceful democratic revolution in the country.