IT course planned for 800 students 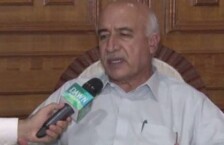 QUETTA: Around 880 students of Balochistan, divided in 44 batches, will be enrolled in the Oracle Graduation Programme.

This was revealed by the provincial secretary for information technology, Dr Omar Babar, at a meeting chaired by Balochistan Chief Minister Dr Abdul Malik Baloch on Wednesday.

Addressing the meeting, also attended by a delegation of the Bill and Melinda Gates Foundation, Dr Baloch said that poverty could be eliminated and goals of development could be achieved by promoting computer science and information technology and by eradicating polio virus.

“The 21st century is the century of information technology and computer science and by promoting and adopting them, we can eliminate poverty,” he said.

“There are lots of jobs for persons equipped with education in information technology and computer science,” he said and emphasised the need to expand Oracle Graduation Progra­m­me at the district level in Balochistan.

Appreciating the role of the Bill and Melinda Foundation, he said it had played a remarkable role by contributing efforts to eliminating polio virus in Balochistan permanently.

“The Balochistan government has been making serious efforts to provide all available facilities at hospitals and appoint specialist doctors,” he said.