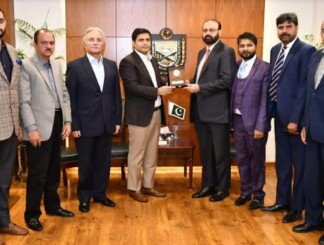 ISLAMABAD-  President Islamabad Chamber of Commerce and Industry Ahsan Zafar Bakhtawari on Tuesday said that ICCI plans to establish its own radio station and TV channel to highlight the business and investment opportunities in Pakistan. He expressed these views while talking to Pakistan Media Regulatory Authority’s Director General Finance Shamim Gul Durrani, who visited ICCI to discuss matters of mutual interest. Ahsan Bakhtawari said that the electronic media instead of highlighting crimes and other negative news needs to create awareness about trade, business, investment and the economy to produce entrepreneurs. ICCI President said that the chamber was working on establishing its radio and TV channel to promote those who have created wealth with hardwork and honesty as role models in society. Speaking on the occasion, Pakistan Media Regulatory Authority’s Director General Finance Shamim Gul Durrani said that PEMRA is ready to cooperate with ICCI in establishing radio and business TV channels. He said that Pakistan’s prosperous future is linked to a strong economy and stressed that the print and electronic media should play a role in highlighting business and investment opportunities in the country to attract the attention of investors. He appreciated the plan of ICCI for establishing a special technology park and said that Pakistan has great potential to enhance IT exports by focusing on better development of this sector. It would also provide more jobs to the youth. Talking about giving representation to ICCI in the Council of Complaints of PEMRA, he said that Parliament needs to amend the Act in this regard as there is no such provision in the existing Act. Both institutions discussed various issues of mutual interest on this occasion. Zafar Bakhtawari, Muhammad Ejaz Abbasi, Raja Imtiaz, Khalid Chaudhry and others were also present at the occasion.