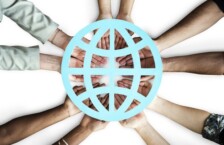 ARTICLE 19 of the UN Declaration of Human Rights guarantees freedom of expression. It states that everyone has the right to freedom of opinion and expression; this right includes freedom to hold opinions without interference and to seek, receive and impart information and ideas through any media and regardless of frontiers.

Technological advancements paved the way for the internet revolution. The Internet has become a global platform for connecting humans living in different parts of the world.

Evolution of the internet has resulted in social networking sites which offer peaceful assembly, under the ambit of article 20 of UNDHR.

To ensure unhindered access to the internet, on 01 July, 2016 UN Human Rights Council adopted a resolution.

The body acknowledged that spread of information and communication technology and global interconnectedness has great potential to accelerate human progress, to bridge the digital divide and to develop knowledge societies.

The body also noted that the exercise of human rights, in particular the right to freedom of expression, on the Internet is an issue of increasing interest and importance, as the rapid pace of technological development enables individuals all over the world to use new information and communications technology.

The body also affirmed the importance of applying a comprehensive human rights based approach for providing and expanding access to the internet and stressed all the states to create an enabling environment for bridging different forms of digital divide.

Internet connectivity played a pivotal role during the COVID-19 pandemic and it was vital to lessen the catastrophic effects.

Internet based platforms provided an alternate ecosystem of e-commerce, online education and telemedicine.

Work from home leveraged companies to continue their functioning unhindered. However, it is a hard fact that around 37 per cent of the world population is unable to access the internet.

Moreover, merely provision of the internet does not guarantee that people are conversant with the internet.

Low education rate is a significant barrier to internet use even if connectivity is available in less educated areas.

It is imperative that the world should overcome the digital divide. It is ironic that each technological advancement deepens the existing divide of developed and underdeveloped areas.

The Internet is an enabler for many other fields such as health, education, law enforcement to name few.

Thus the provision of the internet is essential for smooth functioning of life. The internet society defines internet shutdown as an intentional disruption of Internet-based communications, rendering them inaccessible or effectively unavailable, for a specific population, location, or mode of access, often to exert control over the flow of information.

However it is also observed that different regimes try curbing people’s liberties and undermining dissenting opinions by curbing or degrading internet access.

After abrogation of Article370 which guaranteed special status to Indian occupied Jammu and Kashmir, the Indian government resorted to shutdown internet access in entire of IOJ&K as preventive measure to block voice of Kashmiris.

The internet service was partially restored in May, 2020 with only 2G data spectrum. The purpose of this partial and poor internet access was to block streaming of atrocities committed by Indian government.

Recent surveys indicate that In Pakistan internet penetration is almost 54 per cent. However during COVID-19 pandemic it was observed that much work is required to be done for availability and quality of internet access to all segments of society.

According to the latest ranking by Inclusive Internet Index, Pakistan stands at 90th position out of 12o countries in the list.

The internet has come a long way to become a human right as well as a basic necessity for normal function of human life.

Where governments are bound to provide basic necessities such as adequate health care facilities, safety of their citizens and provision of education, the sustained and high speed internet is pivotal for the viability of these necessities.

Moreover un-interrupted and quality internet service is imperative for peaceful assembly on social networking platforms such as Twitter Spaces.