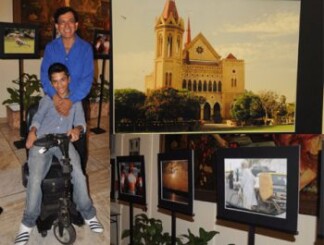 KARACHI: Hashoo Group and Management of the Pearl Continental (PC) Hotel Karachi organised an exhibition of photographs by 17-year-old Farrukh Mughal, on Friday.
On the occasion, 30 photographs of the child were on display, based on the stories of common people and natural beauty. His photographs mostly revolve around the natural beauty along with everyday life of common people, particularly the hardworking section of our society.

In one of the photographs, Mughal has captured a sweeper, who is busy cleaning the roads.
He has taken pictures of several objects lying around in our surroundings, that we normally neglect. Like an abandoned ship, that none would find beautiful while rushing past the beach.
Another picture is of a seagull soaring a little above the ocean with its majestic wings, and yet another of a bird, sitting on the grass.

Furrukh is a special child by birth. The doting parents have given Farrukh a very normal life, and he is very much like the many kids his age. However, he is special in so many ways and the apple of his family’s eye.

He has courage, strength and the intelligence most people could only dream of, and the one thing he is very passionate about is photography. He is an artist in his own right. He values the art of photography. It’s not only his passion but it is food for his soul.

Talking to Daily Times, Farrukh’s sister, Tabasum Mughal said that her brother is a self-taught photographer. “Despite being a physically impaired or special child, he has multiple God gifted talents. Whenever we go for outings, he captures different scenes through his cameras eye,” his sister related fondly. We can see in his pictures that he focuses on the real life and every day things that we often neglect, she said.

Jimmy Engineer, a famous artist, commented that Farrukh is a talented young boy, who enjoys several themes and subjects, including natural beauty.
“How will people know, if we don’t provide youngsters with opportunities and a platform?” he asked, adding that it was a wonderful exhibition.

“I hope one day he would become a great Pakistani photographer,” he concluded.
Farrukh’s father, Zubair Mughal said, “Today, I am feeling so proud of my child Farrukh. Despite being a special child, he does numerous unexpected works in his life.”

He said that he had no knowledge of his photographic skills until last year. He stated that his son seems to be naturally talented.

“Initially, I gave a normal camera to my son, but later, after seeing his keen interest I have given him a digital camera, so that he can enjoy his favourite hobby,” said the proud father of the young photographer.

The language of lines