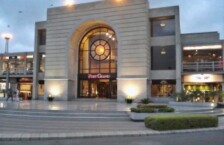 A 14-member delegation of Indian journalists, on a visit to Pakistan, visited the Port Grand on Monday. The Indian media delegation accompanied by office-bearers of Karachi Press Club enjoyed the Hi-Tea in the Tavern built by one and half century old wood and stone which was taken out from the old Napier Mole Bridge during the reconstruction process.

The Indian media men appreciated the preservation of one and half century old Napier Mole bridge by converting it into an innovative and unique leisure facility for the citizens.

The Indian Media delegation comprise members of Mumbai Press Club, led by its president Gurbir, Singh appreciated the fact that such a leisure facility of international standard had been established in Karachi, which could be replicated in Mumbai as well.

Port Grand Food and Entertainment complex was conceived and built by Grand Leisure Corporation. Chief Executive of Grand Leisure Corporation Shahid Firoz said “Port Grand is an effort to revive the culture and traditions of old Karachi as well as celebrate it as the City of Lights. It has revived the harbour culture, ie seafood, boating around the mangroves, pedestrian friendly harbour front experience etc.”

Several foreign food chains and retail stores have established their outlets at Port Grand which is a sign of investors’ confidence in Pakistan. The project is the first of its kind in the city and the country where exceptional attention has been given to every detail including beautiful hard and soft landscapes, nautical accents and 19th Century Lanterns/street furniture. The Port Grand project is country’s only harbour front food and entertainment enclave which offers matchless attractions for the whole family to enjoy together. Thousands of people visit Port Grand daily from across the country.

The Port Grand will maintain international standard of food hygiene and the place and will be fully protected by high tech security solution. Port Grand also features a trading post for retail and fast food including international franchises; a floating restaurant, children play area and a Cineplex with different cafes.