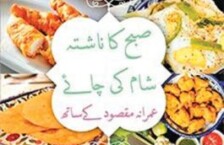 KARACHI: Imrana Maqsood, the wife of veteran playwright Anwar Maqsood, is a published author who has penned over two dozen books during her writing career. Her last book Uljhay Suljhay Anwar that chronicled the ‘adventures’ of her husband did extremely well and became a bestseller.

Her latest book Subha Ka Naashta Shaam Ki Chai is her third attempt at cookery (and fourth book for adults) and was launched in the presence of friends and family on Wednesday at her residence.

The event was hosted by none other than Anwar Maqsood who started it by introducing himself as the husband of the writer; he blamed his friend Asif Noorani for making ‘Immu’ write books at will. “If there was a law against book laundering” Anwar Maqsood stated “then Asif Noorani would have been in jail.” He went on to term the book as a surprise especially for him because his breakfast comprises of two slices of bread and leftover curry which are not part of the book.

Before handing over the microphone to others, Anwar Maqsood told the audience that the reason why the book launch was held in their home was that the food served was more expensive than the book, thus a good “investment” by the buyers. He added that he was as thrilled for the book as the readers because he has never tasted the food that was mentioned in it.

Veteran journalist Asif Noorani, former Test cricketer Salahuddin Sallu and former federal minister Javed Jabbar then commented about Imrana Maqsood and her book with the latter claiming to be speaking for the first time on a book he hadn’t read. He hailed the presence of more females in the crowd which was different from his last gathering where there was only one. In his speech, JJ also appreciated Imrana Maqsood’s dedication to charity and involvement in social work which is what makes her a “role model” for many women.

Author Imrana Maqsood in her short speech thanked the crowd for gracing the occasion and hoped that her book will help people improve their cooking. She went on to add that despite “caring for” Anwar Maqsood who has never been serious in their 49 years of marriage, she couldn’t have asked for a better life.

The book is filled with delicious pictures of all kinds of breakfast, brunch, and hi-tea items one can imagine and dream about.