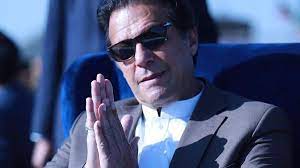 PESHAWAR: The Khyber Union of Journalists (KUJ) has expressed concern over the inappropriate attitude of PTI Chairman and former Prime Minister Imran Khan towards journalists in Peshawar, said Union President Nasir Hussain and Senior Vice President Imran Ayaz in a statement. In a joint statement, Vice President Basir Qalandar, General Secretary Imran Yousafzai, Secretary Finance Shahzeb, Joint Secretary Irshad Maidani and members of the Executive Council said that whenever Imran Khan visited Khyber Pakhtunkhwa as Prime Minister, he was a journalist. Bringing certain people from Islamabad under the guise of answering their own questions which has already opened the floodgates of their independent media claim, now that they are not the Prime Minister they should change their attitude, the union leaders said. He said that for the last few days, the PTI leaders have been behaving in a derogatory manner towards the journalists. Imran Khan’s attitude is regrettable while the serious threat to senior journalist Tariq Afaq by another leader is reprehensible.