KARACHI: A year ago the Supreme Court of Pakistan (SC) passed a judgement for the protection of rights of religious minorities and to review its progress and implementation, the Pakistan Institute of Labour Education and Research (Piler) organised a consultation meeting on Tuesday where representatives of civil society and religious minorities gathered to share their experiences.

Titled “Ensuring equal rights for minorities: strategies for the compliance on the supreme court judgement in Pakistan”, the consultation meeting however faced a situation of lack of direction as the discussion provided a more general outlook of the judgement rather than a detailed documentation of its implementation in the country over the past year.

Many believed that despite the passing of this historic judgement, there was a lack of advocacy and lobbying to further its impact and very few organisations had made effort to document its progress.

The South Asia Partnership Pakistan (SAP-PK) and Piler are among the few organisations investigating this and according to ShahnazSheedi of the SAP-PK, “implementation is poor as the SC’s judgement has not been implemented the way it deserves to be.”

However, Advocate Faisal Siddiqi disagreed. “The impact of this verdict cannot be felt in one year and will take at least a decade.” He quoted the example of racial segregation of schools in the United States and how it took more than a decade to completely eradicate it through rigorous implementation of the law.

MrSiddiqi also commented on how this judgement despite criticism levelled against it could change the mindset of courts. “This law has enlarged the liberal space for minority rights and establishing their importance, and proper implementation will allow a trickle-down effect.”

“For this to happen, multiple legislations need to be filed with the SC by individuals who feel that their religious rights have been compromised.”

Chela Ram Kewlani, president of the Pakistan Hindu Council, was sorry to observe that minorities in Pakistan cold only look towards social organisations and NGOs to help fight for their rights. “The same cannot be said of the government,” he added.

He spoke out on the different problems the Hindu community had faced living in Pakistan since the partition. “Our problems and issues remain the same and we have been airing our grievances repeatedly on different platforms. However, progress is slow.”

He criticised the Sindh government in particular for not having a functional religious minority commission to protect and promote their basic rights. However, he also placed blame on parliamentarians representing their religious communities.

“Lack of goodwill and political ambitions tend to trump the welfare of the Hindu community and thus we see lack of progress even from within.”

The issues of ‘forced conversions’, forced marriages and lack of security provided to temples were also discussed by MrKewlani. With regards to the five per cent job quota provided, the government was criticised for restricting the progress of Hindu applicants. “Are we to remain a hangman, a sweeper or part of the lower staff? Must we never be given jobs in the upper tiers of the government to progress?” he questioned.

MrKewlani, after his impassioned speech, was criticised by some attendees about the lack of representation and cover given to the scheduled class in the Pakistan Hindu Council. Some also highlighted how in different Hindu-majority areas, other minorities such as Sikhs were discriminated against in a very similar fashion.

RubinaBrohi of the Sindh Human Rights Commission shared instances of where the government had played a productive role in addressing the grievances of religious minorities.

Journalist Amar Guriro spoke about how the existence and survival of religious communities in Pakistan was dependent on the exposure they got in the media. Apart from a handful of issues, many real problems of these communities were not highlighted as they did not generate the necessary hype, he said.

“When we don’t give communities the basic right to vote, we cannot ensure that they get their due rights in other areas. Millions of rupees are exchanged to purchase a seat for minorities in the parliament yet no one is reporting on this issue,” he concluded. 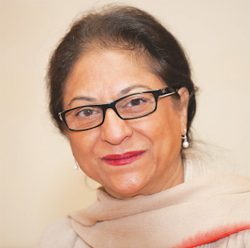