LAHORE: Protesting against attack on senior anchorperson Hamid Mir and illegal suspension, displacement, distortion and closure of Geo TV network across the country on 47th day Wednesday in which a large number of journalists, members of civil society, representatives of labourers,workers of political and religious parties and lawyers participated.

Carrying banners and placards, inscribed with slogans in favour of Hamid Mir and Jang/Geo, hundreds of protesters gathered here outside Jang/Geo offices on Davis Road. They demanded immediate restoration of Geo transmission, saying Geo is the voice of people and they cannot be denied to have access to read and watch Jang and Geo. They also expressed serious concerns that those who were responsible for the attack on Hamid were still at large even after the passage of over a month and half.

Jang Employees Union Wednesday also started token hunger strike campwhichwould continue till the arrest of perpetrators of Hamid Mir and complete restoration of Geo TV transmission. They were of the view that if the incumbent government and the independent judiciary should resign immediately they have surrendered themselves before the country’s powerful establishment. The participants also condemned burning of vehicles, deployed to supply newspapers of Jang Group, and copies of Jang and The News in various cities of the country.

SohailWarraich said workers of Jang/Geo are struggling hard at this crucial time and would win the battle at the end. He said the issue may take more time in settling but independent journalism would be the winner of this battle. Abdullah Malik, congratulating Jang/Geo, said all anti-democratic forces have gathered to derail democracy and democratic system by punishing Jang/Geo, the largest media house of the country. He said hidden hands were after Jang and Geo from the day when Hamid Mir was attacked in Karachi. According to him, Jang/Geo are the voice of millions of Pakistanis within and outside the country and they would not allow anyone to ban their favorite channel. He also condemned burning vans and copies of daily The News and Jang in various cities of the countries, saying such dictatorial acts would not bow Jang group to the powerful establishment as they always supported the truth. Khursheed said the world has become a global village and truth cannot be pushed in darkness in the prevailing circumstances. He demanded of the government to implement the Supreme Court orders regarding restoration of Geo transmission in the country.

Khawar Naeem Hashmi said journalists and other segments of the society at this stage are fighting for independence of the judiciary, as government has no control over its any institute. He said workers of Jang/Geo have foiled many such conspiracies in the past andwould not let the angels succeed in their nefarious designs of maligning the largest and independent media house of the country. Bedar Bakht said anti-democracy forces wanted to push back the independence of media which would not be tolerated at any cost, saying journalists have sacrificed a lot for democracy and independent media. He said unity among journalist community would be the key at this crucial phase of journalism, saying it would also help in defending our rights and democracy. He said through a planned conspiracy, angels want to damage the largest media house of the country to promote their vested agenda. Senior journalist Rauf Sheikh said some hidden hands are instructing a few ‘fortunate’ anchorpersons to hurl abuses at Jang/Geo and also inciting violence against workers of the group as well. He said the journalist community should identify such black sheep to throw them out, as they have nothing to do with this noble profession. Ijaz Mirza said the government should adopt new legislation to protect journalist community and legislation was also required for cable operators, so that they could not violate rules of Pemra. At the end of the protest, Fateha was offered for two martyrs of Pak Army who laid their lives fighting terrorists.

Meanwhile, the Bahawalpur Union of Journalists in its general body meeting urged the government to restore Geo News and other channels on cable and stop attacks on Jang and The News delivery vans. The meeting was held Wednesday and it was chaired by its president Majeed Gill, who urged the information ministry to play its role to resolve the issue of restoration of Geo channels on cable. The participants condemned role of cable operators, saying the operators illegally are stopping Geo channels and in this way they are committing contempt of apex court, because the court issued its verdict on May 26, that no cable operator has the right to stop Geo News. The meeting also called for an action against cable operators. The meeting was especially attended by vice president Pakistan Federal Union of Journalists Ameen Abbasi, who condemned attacks on Jang and The News vans, working journalists like Hamid Mir, Zafar Aheer and Asif Kabeer and demanded arrest of culprits. 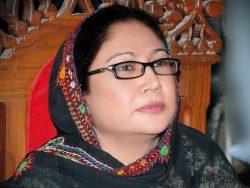