ISLAMABAD: The International Labour Organisation (ILO) is organizing an event today at the Pak China Friendship Centre where the media products of the selected students of Mass Communication from seven national universities would be launched.

The media products included research studies, video documentary and short films on various aspects of child labour. Interesting stage and song performances by school children would also be presented on the occasion.

Lars-Gunnar Wigemark, the Ambassador of European Union Delegation to Pakistan, would be the chief guest at the event. While Federal Secretary of Human Resource Development, provincial Secretaries of the Labour Departments, the President Employer Federation of Pakistan, and General Secretary Pakistan Workers federation will be guests of honour.

The participants will also include heads of various UN organizations working in Pakistan, diplomats, representatives of employers’ and worker’s organization, members of civil society, media personnel and university students. The event is part of the ILO collaboration with EU under its project ‘Combating Abusive Child Labour II’ to launch the University Research Programme on Worst Forms of Child Labour.

Purpose of this initiative is to enhance interest and attract the future generation of media personnel at universities to be part of the movement against child labour and to mould them as activists from the studentship who will then take proactive initiatives to change the perceptions and attitudinal behaviour of society when they join the labour force in future. 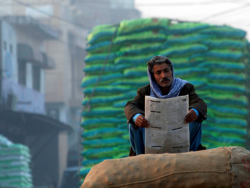