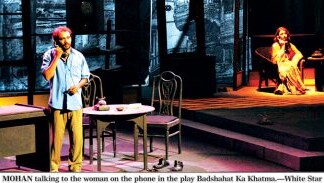 KARACHI: Great writers see ahead of their time, therefore their writings have an air of timelessness about them. Sadat Hasan Manto and Rajinder Singh Bedi are two of Urdu’s foremost storytellers. The National Academy of Performing Arts’ stage productions of Manto’s short story ‘Badhshahat Ka Khatma’ and Bedi’s play ‘Naql-i-Makani’ — both directed by Khalid Ahmed— at the academy’s in-house theatre on Wednesday managed to communicate the essence of both tales to theatre-goers.

Naql-i-Makani pivots around a newly wed couple Nafis (Farhan Alam) and Azra (Kaif Ghaznavi). The couple has rented a flat. As they try and settle in, Azra finds an anklet in the room that makes the two of them a bit suspicious. It is when the paan-wallah (Hammad Sartaj) in the neighborhood tells them that the previous tenant of the flat, Shamshad Begum, was a prostitute that they find themselves in a spot of bother.

The couple tries to get on with life but things take a new turn when an alcoholic student Sayyan (Rauf Afridi) barges into their house looking for Shamshad Begum thinking she still lives there. The spat between Nafis and Sayyan results in the latter finding out that Shamshad is not there anymore. He looks at Azra and finds her attractive enough to replace Shamshad.

As the story progresses residents of the area start pestering the couple. Things get worse when one of them hears Azra sing.
They constantly harbor the idea that Azra can be a replacement for Shamshad. When the couple resists their urgings they threaten to badmouth about them accusing Azra of being a dancing girl.

As fate would have it, the couple suffers a financial crisis as Nafis’ niece is about to get married and he has to bear the wedding expenses. Azra provokes him to cross his limits in his office. He is already semi-convinced. In the meantime an elderly gentleman arrives, which Nafis first thinks he’s the colleague he is waiting for, but it turns out that he’s an old admirer of Shamshad Begum and used to visit her once a year. Knowing that he’s a rich man, he invites him in and cajoles his wife to sing for the Seth.

‘Badshahat Ka Khatma’ is the story of a man by the name of Manmohan (Ziaul Hasan). He practically lives on a footpath. As the story begins he is seen in a friend’s office where he is supposed to spend some time. He chances upon a novel whose last few pages are missing. One day he receives a call from a woman (Kaif Ghaznavi). Initially he finds the caller an ordinary person.
After the second call they start developing a romantic relationship. Throughout this period he doesn’t try to know the name of the woman. Gradually he falls for her and yearns to listen to her voice on a regular basis. When she doesn’t call, he gets irritated.
He even starts hallucinating about her.

When his friend informs him that he’s going to come back to his workplace, Mohan gets edgy. He tells the woman that his stint at the office is about to end. She promises him that prior to that she will give him her telephone number. Mohan feels the pangs of love when the woman tells him that she won’t be able to call him for a couple of days, because she’s going out with her relatives.
This makes the chain-smoking Mohan lose his wits. His health deteriorates and when she calls him to give him her number, he collapses.

Both plays had their merits and demerits, but Badshahat Ka Khatma (despite tinkering with the original version) proved more engaging than Naql-i-Makani. The latter was affected primarily because of the insufficient dramatic elements. The biggest issue was the unsatisfactory buildup to the climax. It seemed as the end was somehow logical. Kaif Ghaznavi, who is not a bad performer, could have taken the last scene to the next level when her husband asks her to sing for money. But she sang the song as if she was prepared for it. Farhan Alam as Nafis acted well and showed the moral crisis that his personality was trying to grapple effectively.

Nazrul Hasan as Manmohan did an impressive job. He understood the character very well. One felt that the songs that the woman sings for Manmohan were a tad too many. Otherwise the play had the intensity required for such a story and the climactic scenes justified Mohan’s character transformation.

The double bill will run until May 5 from Thursday to Sunday.