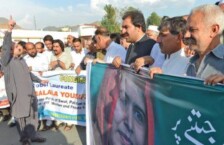 MINGORA/KHAR: Celebrations of Malala Yousafzai winning the Nobel Peace Prize continued in the child education activist’s native district of Swat for the second day on Saturday.

The Swat Qaumi Jirga organised a function and took out a rally in the district to celebrate Malala’s achievement.

The function took place at Khpal Kor Model School, where educationists, politicians, students and social activists showed up in large numbers. Malika, a 10-year-old schoolgirl, cut the cake and gave a tribute to the education activist.

The speakers praised Malala for doing the country proud and said they were hopeful that the girl would continue with her struggle for promotion of education, especially for girls.

The speakers said Malala had strong nerves and was committed girl, who raised voice against militancy and worked for the girls’ education especially when militants were strong in Swat. They said winning Nobel Peace Prize was an honour of the entire country and that achievement showed the world recognised her struggle for the girls’ education.

The speakers said Swat had a large number of girl students, who were willing to work for the promotion of education. They said Malala had motivated girl students to come forward and promote education for girls.

The speakers praised Malala for planning to establish schools and a college in Shangla and Swat districts saying the plans showed the girl’s commitment towards the girls’ education. In Bajaur Agency, too, human rights and women activists on Saturday showered praise on Malala for doing the country proud by winning the Nobel Peace Prize.

They said the prize was a big honour for the country as well as Pashtuns. Noted among them were Human Rights Commission of Pakistan coordinator Shahid Habib Syed, Society for the Protection of the Rights of the Child coordinator Hanifullah Jan, Women Rising of Pakistan chairwoman Raina Gul, Habibul Hassan Yad and Nazir Gul Nadan.

“The Nobel Peace Prize for our sister Malala is a great honour for all Pakhtuns. She has shown to the world that Pakhtun nation believes in peace, tolerance and harmony,” she said.

Habibul Hassan Yad said the Nobel Peace Prize for Malala was a clear message to the world that Pakhtuns were the most peaceful and civilised nation of the country.

He said the honour would help enhance the image of Pakhtuns in the eyes of the international community. Human rights and women activists asked the federal government to establish a women’s university in northwestern tribal areas in the name of Malala to promote female education.