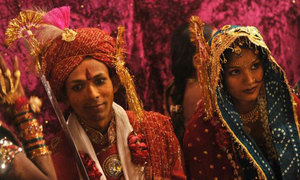 ISLAMABAD: Despite delivering an emotionally charged speech in favour of the proposed Hindu marriage law, National Assembly Standing Committee Law and Justice Chairman Chaudhry Mahmood Bashir Virk could not convince members of the committee to approve the bill, on Wednesday.

In his speech at the ‘National Conference on Hindu Marriage Bill’, the PML-N MNA recounted his late father’s efforts at the time of partition, saying that when Muslims, Hindus and Sikhs were fighting each other, he had taken in and sheltered scores of non-Muslim women and children.

“Many people lived in our house and ate with us; we later arranged safe passage for them to India,” he said, adding, “that was our responsibility as human beings, whereas taking care of Hindus and other non-Muslims living here in Pakistan is our duty to the motherland.”

He said that Islam or Pakistan would not be threatened if “respect and rights” were extended to the non-Muslim citizens of the country. There are currently no marriage laws for Hindus in the country and their marriages are not registered with any government department.

“Nobody can say that a Muslim who is a criminal or terrorist would be ‘a loyal Pakistani’, but it is unfortunate that the loyalty of Hindus is always in question, even though they have done the country no harm,” he said.

Stressing the need for family laws for Hindus and other non-Muslims, he said that while Muslim women did not have the right to divorce, the British formulated laws in 1939 granting all women the right to seek divorce.

“The world is a better place for Muslim men and women after the enactment of family laws. There should be similar laws for non-Muslims in Pakistan too,” he said.

He also suggested that the country should have one marriage certificate form, which has the provision to mention whether the persons getting marriage are Muslims or belong to some other faith.

However, a meeting of the National Assembly Standing Committee on Law and Justice, held after the conference, did not approve the Hindu Marriage Bill 2015 for tabling before the house.

The bill faced objections by Raza Hayat Hiraj of PML-N and Dr Arif Alvi of the PTI, who demanded the law department alter the language of certain clauses. The bill has been deferred and will now be taken up at the next meeting.

Speakers also highlighted that women were the worst-affected by the absence of the law, since it was almost impossible for them to prove their status as a widow in case of the death of their spouses.

Other speakers at the conference decried the lack of political will that was delaying the approval of the Hindu marriage bill.

After the 18th amendment, the subjects of family laws and minorities had been devolved to the provinces. However, the provinces could grant the federal government the right to legislate on the matter by adopting a resolution in their respective assemblies.

Balochistan MPA William Barkat, who belongs to the Pakhtunkhwa Milli Awami Party, said that his province was the first to adopt the resolution, followed by KP.

“We have the most conducive environment of religious tolerance in the country – there has not been a single case registered under the blasphemy law in Balochistan and there are no cases of intolerance or mob justice there,” he said. He admitted there was a serious sectarian problem in the province, but that was “something else”.

Punjab PML-N MPA Mary Gill said her party had decided to approve the resolution granting the federal government the power to formulate a Hindu marriage bill. “This resolution will be approved by the Punjab Assembly in the coming weeks,” she added.

However, Hyderabad Press Club President Jai Parkash and eminent Sindh-based lawyer Om Parkash, decried the Sindh government for not approving the resolution to grant the federal government the right to enact a Hindu marriage bill.

“This is clear discrimination,” Jai Parkash said, adding, “if the governments cannot grant us even basic rights, they should amend the Constitution and clearly say that Hindus should not expect anything from the state.”

Former Justice Majida Rizvi said that Pakistan was established as a secular country, but things gradually began to move towards extremism and after the 1973 Constitution was promulgated, non-Muslims were excluded from many roles.

“Now, there are calls for the implementation of Sharia, but nobody can define which Sharia they want,” she added.