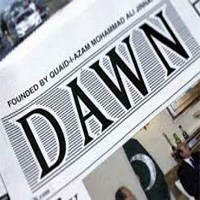 KARACHI: Human rights and media watchdogs on Tuesday condemned the travel ban on Dawn’s assistant editor, Cyril Almeida, and called for the immediate removal of all curbs on freedom of expression and free speech in the country.

Mr Almeida’s name was placed on the Exit Control List by the interior ministry on Monday night after the Prime Minister’s Office issued three separate contradictions against his story, ‘Act against militants or face international isolation, civilians tell military’, which appeared in Dawn on Oct 6.

“Barring Cyril Almeida from travelling abroad and the apparent pressure on his employers, the highly respected Dawn newspaper, will cause distress to all those, at home and abroad, who believe in the freedom of expression and the rights of journalists. This is not the time to turn the international journalist community against Pakistan,” the Human Rights Commission of Pakistan said in a statement.

The statement noted that while Pakistan was passing through “difficult times… wisdom lies in respecting the freedom of expression rather than suppressing it, because neither national unity can be achieved nor any issues of governance resolved by finding scapegoats among journalists.

“HRCP calls upon the authorities to immediately remove [Mr Almeida’s] name from the ECL and refrain from harassing him and [intimidating] his employers. We must also stress that whatever matters are of concern to the establishment must be dealt with in accordance with the law, freedom of expression and other rights of citizens, particularly with regard to the due legal process.”

Meanwhile, a news channel, Geo News, reported on Tuesday evening that top officials in the security establishment had said that they had nothing against Dawn or Mr Almeida and they had no role in putting the Dawn staffer’s name on the ECL.

It quoted “high-level military sources” as telling the channel that they only demanded that the government determine the person who leaked the news of a high-level meeting on national security in a distorted form to the newspaper.

Amnesty described the latest statement from the PM’s Office, which threatened stern action for the publication of the report because it risked vital state interests, as “chilling”.

“The language used by the PM’s Office is chilling. It is one thing for the authorities to dispute and contradict a media report. But it is quite another to threaten a journalist under the guise of national security,” Ms Gaughran said.

Journalists’ bodies in Pakistan also reacted sharply to the curbs placed on their colleague’s movements. The All Pakistan Newspapers Society (APNS) condemned the decision to place Mr Almeida on the ECL and demanded that the action be reversed immediately.

“The APNS believes that the right of freedom of expression is enshrined in Article 19 and 19A of the Constitution of Pakistan and is one of the basic pillars of the democratic society… singling out a story and making it a reason for not-so-cordial civil-military relations or blaming it for creating fissures between the same, seem absurd.”

The statement said it was very disturbing to see a democratic government reacting in an arbitrary manner and opting to ‘shoot the messenger’. “The government can always take any complaint against the newspaper to the Press Council, a legal forum created for this very purpose, rather than acting in a one-sided manner,” the statement said.

The Council of Pakistan Newspaper Editors (CPNE) noted that if the government still felt — after clarifications from the prime minister and the Punjab chief minister were carried prominently by all newspapers including Dawn — that the story was inaccurate, it could proceed with legal action provided under the law and constitution, which guarantees freedom of the press.

The CPNE noted that only the courts could decide whose stance was correct; the government’s or the paper’s. “Taking unilateral action against an individual or media organization without providing them the chance to defend themselves is in violation of the freedoms provided in the Constitution.”

Condemning what it termed “the harassment of senior journalist Cyril Almeida”, the Adhoc Committee of the Pakistan Federal Union of Journalists (PFUJ) has demanded that the government avoid placing curbs on freedom of expression and speech in the country.

In a press statement issued from Peshawar, committee chairman Mohammad Riaz stated: “An elected government always protects the right to free speech and expression… [but] in the present case the government had thrice issued rebuttal of the said story and… [then] started taking action against the journalist and placed his name on the ECL.”

The statement calls Mr Almeida “a senior journalist of repute” and says that placing his name on the ECL amounted to harassment and curtailment of his freedom of movement, as well as gagging the press.

In case the government continued down this road, Mr Riaz said the committee would meet after the Muharram holidays to chalk out a future course of action.

Anwar Iqbal adds from Washington: The US State Department said on Tuesday that it was concerned about any efforts to limit press freedom or the ability of journalists to conduct their work.

“We are aware of these reports of restrictions on Mr (Cyril) Almeida’s travel. We refer you to the government of Pakistan for additional information,” said a State Department spokesperson when asked to comment on the ban.

The spokesperson said that press freedom was an issue that they raised regularly with the government of Pakistan, including “our concerns about the difficulties and dangers journalists face in Pakistan”.

The Nation: Amnesty calls for dropping travel ban on journalist