The government of Pakistan has awarded Tamgha-e-Imtiaz to trend setter solo guitarist and music teacher, composer Sajjad Tafu for 2015. Tafu is the first guitarist of the country who has been recognised worthy of the award. The 50 years old Tafu comes from Lahore’s famous Mozang Gharana of musicians including composers and music directors Ustad Tafu, Tabla Nawaz, Master Abdullah, Master Inayat Hussain and Akhtar Akhian.

Tafu started his music career at the age of 14 when he performed in the background music of film Aina in 1974. Presently, he is a senior musician of Radio Pakistan and Pakistan Television. As a solo guitarist, Tafu is a classical performer of Sufi music and old songs of Pakistani and Indian film industry. He has performed in several countries including USA, UK, Holland, Denmark UAE. 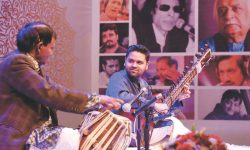