Govt to facilitate institutions to work within limits: Firdous 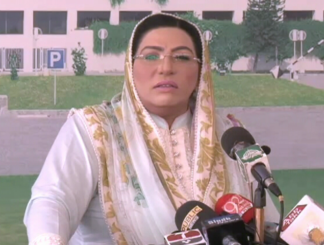 ISLAMABAD: Special Assistant to Prime Minister on Information and Broadcasting Dr Firdous Ashiq Awan Friday said the government will discharge its duty of a facilitator, enabling the state institutions to work within their constitutional and legal parameters.

Speaking here at a function, Dr Firdous emphasised that the government would ensure internal stability in the country, saying Pakistan could not afford any kind of unrest, kite-flying or a negative perception in the comity of nations. The special assistant pointed out that Prime Minister Imran Khan and the government were striving to create an ideal atmosphere for investors and tourists in the country and the world was also being attracted towards Pakistan, having a new beginning as a Naya Pakistan.

Dr Firdous maintained that any negative impression about the country affects journey of progress. Referring to the much-discussed para-66 in the detailed judgment in high treason case against former president General (R) Pervez Musharraf, she said it reflected personal grudge and earned bad name for the country: the way the judicial system was put at stake at the personal whims of someone.

“When a situation demands from a government, it has to play its role and fulfil its obligation and the government is going to do exactly that by filing a reference in the Supreme Judicial Council (SJC), being its legal right. And what are their reservations, if any, and what priorities they set is their issue,” she said.

In a light way, she said that when someone would try to hit sixes coming out of his limits, then the Constitution and the law would come into action against him. She noted that the limited crisis-like situation, which erupted, the enemy on the border tried to take undue advantage of it. “You have to see it to take care of Pakistan, surrounded by rivals, and bring stability and that will be ensured, God willing,” she remarked. Dr Firdous emphasised that the armed forces had rendered supreme sacrifices and lit lamps of peace with their blood and then the civilian and military leadership with complete harmony fought all the challenges on all fronts and put Pakistan’s economy on the path of stability. She referred to FATF and said how the rivals tried to put Pakistan in a precarious situation.

She said that Islam is the biggest torch-bearer of harmony among religions and the Holy Prophet (Peace Be Upon Him) set parameters of it while establishing the State of Madina.