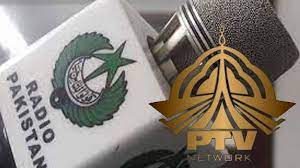 ISLAMABAD – The federal government has decided to merge two state broadcasters Pakistan Television and Radio Pakistan for the purpose of better governance.

“The process of merger has started under the directives of the federal cabinet, and initially boards of directors of both organisations would be merged”, Federal Information Minister Fawad Chaudhary said while exclusively talking to The Nation here yesterday.

He assured that it’s just a merger and there would be no negative impact on employees of these two organisations.

However, he admitted the financial condition of these two organisations is not good and efforts are being made to improve the financial condition and make them financially stable. Fawad Hussain Chaudhary said digitization of state run news agency Associated Press of Pakistan, Radio Pakistan and Pakistan Television is in process and would be completed by the end of the month. “State run PTV would be HD from August this year,” he said.

To a question, the minister said work of National Media University is also completed and would be inaugurated in the second or third week of August this year. “This media university would impart media training to those who want to opt media as a career including officers of the Information Ministry, employees of PBC, PTV besides young journalists”, Fawad Chaudhary said.

To another question, he said the revamping and reforms process in the Ministry of Information has been completed and this ministry would be completely new in its approach and working and would meet the information challenges being faced by the country.

Under reforms, the External Publicity Department is also being activated and revamped and the EP Wing would be divided in various regions of the world to have better working and understanding of various regions of the world. The minister said now and onward it would be mandatory for Press officers to be posted abroad to learn the language of the country where he or she is being posted.

About the future of films, the minister said a new film policy is in process and once completed would be helpful in reviving the film industry of Pakistan.

Answering a question about the proposed Pakistan Media Development Authority, Fawad Hussain Chaudhary said that consultations are in progress with stakeholders on this authority which would be completed soon. “The views of stakeholders are strategically important in taking a final decision on PMDA”, he said.

To another question, the minister said the strategic communication department which was need of the hour has also been set up in the information ministry.