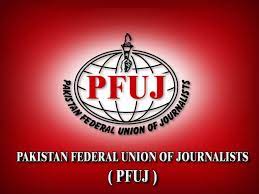 ISLAMABAD: The federal government on Wednesday initiated a dialogue with the Pakistan Federal Union of Journalists (PFUJ) on the 19-point charter of demand presented to it earlier by the Union, says a press release.

The move to hold talks with PFUJ was apparently taken on the direction of Senator Shibli Faraz. The first preliminary round of talks held on zoom was chaired by Information Secretary Ms Shaheera Shahid. PFUJ side was led by its Secretary General Nasir Zaidi. He was assisted by three Federal Executive Council (FEC) members Mr Afzal Butt, Mr Nasir Malick and Mr Mubarak Zeb.

Nasir Zaidi said that a large number of television channels were not paying salaries to their employees regularly while others have imposed cuts on the salaries of their employees. The information secretary agreed and informed the meeting that although the employers had given affidavits to the government to clear the dues of their workers immediately after receiving their advertisement arrears but failed to keep up their promise.

It was agreed between the PFUJ and the information secretary that they would continue these deliberations. It was decided that at the next meeting, demands raised in the charter of demands would be prioritized and things like implementation of wage award and implementation of minimum wages in regional newspapers as required by law and other similar matters which can be resolved through implementation of law would be taken up first. It was also decided that at a later stage the other stakeholders would also be invited to these talks.