The Ministry of Defence has on Tuesday sought the revocation of the licence of a private TV channel over the Hamid Mir affair by moving a complaint to the National Electronic Regulatory Authority (NEPRA). It may be recalled that after the prominent journalist was shot in Karachi on Saturday, his TV channel broadcast his brother Amir Mir’s allegation that Hamid Mir had named the ISI and its chief Lieutenant-General Zaheerul Islam as being responsible if something happened to him. For the brother of the wounded journalist to have revealed this in the immediate aftermath of the incident in the heat of the moment is one thing, but for the TV channel to have gone on repeating the charge for hours afterwards without any evidence or proof was, to put it mildly, a lapse of editorial judgement. Does this mean that the defence ministry’s request should be granted? The question opens up a whole host of issues that Pakistanis and all our institutions need to reflect on at the present conjuncture.

Freedom is a heady wine, and once tasted, the desire for more grows exponentially. This is what has transformed the media scene in Pakistan over the last decade or more. However, freedom if exercised without responsibility is no longer just an inebriant, in excess it becomes poison. Something along these lines has emerged in Pakistan in recent years. First, a certain myth that has gained currency and traction in Pakistan for some time needs to be laid to rest. During the 18th century, the press came to be dubbed the fourth estate in Europe, principally in Britain and France (which was undergoing its Revolution). Estates were categories of communities in society that could be treated as a group because of shared interests. Thus in France, the monarchy, aristocracy, peasantry, etc, were dubbed estates. The rise of the press in the 18th century (its role in the French Revolution is well documented) produced the title of fourth estate for it. Unfortunately this has been translated wrongly in Pakistan as the ‘fourth pillar of the state’. Wrong as the notion is, since the press (media) is not part of the state but arguably located somewhere between (and perhaps bridging) political and civil society as a watchdog of the people’s interests in an inherently adversarial relationship with the state, governments of the day, and authority in general, it has had the inadvertent effect, particularly since 2002, of giving the media the false notion of more power than the ground realities suggest. If this has gone to the heads of certain sections of the media, the nature of things would tend to dictate a correction is due sooner or later. We have argued in this space consistently that there is no such thing as freedom without responsibility, and any such untrammeled freedom cannot be long lasting. Unfortunately, along with the decline of the institution of professional editor, adventurism based on false notions of excessive empowerment has crept into sections of the media. Whatever the mistakes or lapses of such sections, the other tragedy is the manner in which the Hamid Mir affair has brought the split in the media on the basis of professional rivalry out into the open. Some media houses have chosen to use the opportunity of the difficulties the group Hamid Mir belongs to to attack it roundly on the basis of being anti-national, unpatriotic, and even anti-state. It is not for the media to act as prosecutor, judge, jury and executioner in such matters. The lack of solidarity amongst media houses and the journalists associated with them is likely in the long run to damage all of us in the profession.

Since the defence ministry has chosen to take its complaint to NEPRA, justice demands that the process be allowed to play itself out according to the law and rules, and the channel be allowed to fight its case without others in the field nipping away at its heels. We may or may not agree with the approach and policies of one media group or the other or even individual journalists, but this should not blind us to the need to stand in solidarity with victim Hamid Mir and his media group that has collaterally been pinioned in the dock. 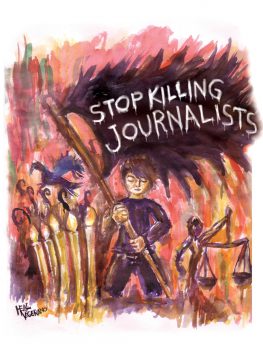