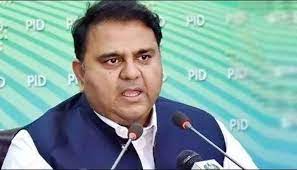 ISLAMABAD: Federal Minister for Information and Broadcasting Chaudhry Fawad Hussain said on Wednesday that he agreed to the opposition’s demand of withdrawing the PECA ordinance following the deliberations and finalisation of draft by joint action committee members.

The PTI minister said this while speaking in a private news channel when the news anchor asked him if he was willing to withdraw the ordinance and sit with the joint action committee members.

The anchor further suggested that a time limit be set and the draft be sent to parliamentarians after being finalised in eight to 12 months. “Are you willing?” he asked.

To this, Fawad Chaudhry replied that he agrees to whatever they say and asked them to set a time limit for finalising the draft. “We have given the mandate to Chaudhry Pervez Elahi to decide the matter,” he said.

He said: “You are also a member of this committee, so talk to Chaudhry Pevez Elahi to incorporate Mazhar [Abbas] Sahib and others having sane voice in it,” adding: “You send the draft through Chaudhry Sahib, we will have no issue in implementing it.”

Earlier, during a phone talk, Chaudhry Fawad Hussain asked Pakistan Muslim League-Quaid (PMLQ) leader and Punjab Assembly Speaker Chaudhry Pervez Elahi to play the role of a mediator between the media and the government on Pakistan Electronic Crimes (Amendment) Act ordinance 2022 (PECA) and whatever matters would be settled between him and the media, would be implemented.

Pervez Elahi Wednesday telephoned Fawad Hussain and conveyed to him the concerns of the media regarding the PECA. Elahi thanked Prime Minister Imran Khan for inquiring after the health of Chaudhry Shujaat Hussain during his visit to Lahore. The two leaders also discussed other important issues, including the PECA law.

“The government has full faith in freedom of expression. We are working on effective regulation. The government welcomes criticism but it is not right to attack anyone under the guise of criticism,” he contended.