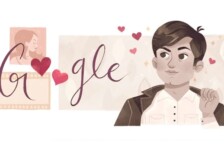 KARACHI: Pakistan’s chocolate hero, Waheed Murad, was celebrated by a Google doodle on what would have been his 81st birthday.

The doodle shows a dreamy Murad with a jacket flung on his shoulders looking on with a photograph of a woman in the background.

According to Google, Murad’s blockbuster films electrified cinemagoers throughout the 1960s and 1070s. Born on Oct 2, 1938, in pre-partition India, Murad was the only son of distributor Nisar Murad. After a brief appearance in the 1959 film Saathi, he began working with his father’s Film Art Productions, becoming the youngest producer Lollywood had ever seen.

“I asked Waheed to become a leading man but his reply stunned me,” she recalled later. Waheed asked if she was mocking him, but after taking a role in the 1962 film Aulaad, he never looked back. The pair headlined many hit movies together, including Heera Aur Patthar in 1964 and Rishta Hai Pyar Ka, which was partially shot in London and Paris, it said, explaining why they decided to remember the late actor.

Murad went on to receive the Nigar Award for Best Producer and Best Actor for the 1966 romantic musical Armaan. The matinee idol was adored by many. He once found his white car covered with lipstick marks from female fans in Karachi.

During a career spanning a quarter-century, he appeared in more than 100 films — Urdu, Punjabi and Pashto productions.

In November 2010, Waheed Murad was posthumously awarded the prestigious Sitara-i-Imtiaz for his outstanding contributions to the arts. To this day, Waheedi Club organises an annual film festival in his honour.

According to Google, Pakistani-Canadian illustrator Anoosha Syed said that while she hadn’t heard of him before, her parents and grandmother were eager to share stories and their favourite Murad films.

“I’d seen a handful of Bollywood movies, and only one Pakistani film, so I knew I had to draw reference from some of Murad’s work for the illustration,” she said, adding that meant watching black and white films from the 1960s, and struggling to understand what was happening without subtitles.