KARACHI: Internationally-renowned scholar and broadcaster Dr Aamir Liaquat Hussain will host a new morning show named ‘Subhe Pakistan’ on Geo TV from today (Nov 19) at 8:30am. The news of the launching of the show has created a wave of happiness among the viewers.

Dr Aamir is popular for his own unique style of hosting among the viewers in and outside Pakistan. He has the ability to bring smiles to unhappy faces through his hosting. He has fans in every part of the world.A lot of hard work has been put in to make the show interesting and unique. The title song of the programme is sung by Sheheryar (Shery). The show’s logo has created excitement among the viewers.

It may be mentioned here that Dr Aamir Liaquat Hussain was declared the ‘Super Star of Media’ last year by the national and international media for setting new records. Dr Aamir’s name had been included in the list of 500 Most Influential Muslims of the world recently, which is an honour for the Geo TV and all Pakistanis.

He has numerous shows to his credit, which are unforgettable. Experts say that Dr Aamir will again come up to the expectations of his millions of fans around the world.‘Subhe Pakistan’ will be telecast live every morning at 8:30am from Monday to Friday. 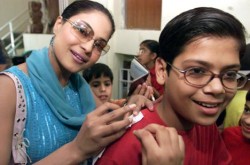