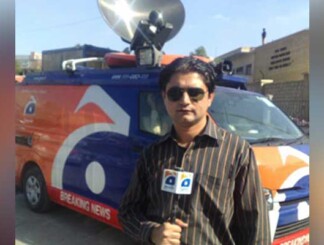 Babar, aged 28, was shot dead in the Liaquatabad neighborhood of Karachi while driving home from office in the jurisdiction of the Super Market police station on January 13, 2011. The murder case was lodged the same day.

“Kamran alias Zeeshan Shani, who is an activist of a local political party, carried out the Babar’s cold-blooded murder and he was given death penalty by the ATC. However, he successfully evaded law and remained an absconder till Monday. He was arrested during a joint operation,” Memon said. “Kamran kept changing his hideouts and finally on Monday morning, on the intelligence-based tipoff by a federal agency, the Special Investigation Unit apprehended him with weapons.” In order to evade arrest, the Kamran would regularly change his hideouts. The Additional IG Karachi said that the suspect remained underground for five years when police, intelligence agencies and the witnesses were actively pursuing him. He eventually settled down in Gulshan-e-Maymar, with his family in the comfort that the chase had gone cold.

In the meantime, the Police had arrested five other suspects – Faisal Mehmood alias Nafsiyati, Naveed alias Polka, Muhammad Ali Rizvi, Shahrukh alias Manni and Shakil Malik – in the city on April 7, 2011. The City Police Chief further said that both Kamran alias Shani and Faisal Mota were involved in the murder and they received death sentences and added that the culprit has initially confessed to four other murder cases “He will be interrogated further,” he said.

The police official said that the case gained lot of attention, as Babar was a crime reporter of Geo News and quite active in the field. Initially, there were eight accused and among them one was identified as Liaquat Ali, who was killed in an encounter. Memon said that several witnesses were murdered, including Rajab Bengali, who was killed in 2011. Another ‘star’ witness Haider Ali, on whose testimony the conviction took place was similarly killed in 2012. Advocate Naimat Ali Randhawa was also murdered in September 2013 while he was pleading the case as a special public prosecutor.

According to the confession of Zeeshan, the police chief said MQM-London South Africa was involved in the journalist’s murder. “Wali Babar was killed because he was considered close to the Awami National Party (ANP) and would report anti-Altaf Hussain stories,” he claimed. The suspect had joined the MQM (London) in 2008 and became part of Faisal alias Mota’s target killing gang.

Addressing media, PPP minister Nasir Hussain Shah said that the ruling party in the province believes in freedom of speech. “The government is taking action for injustice against the journalists, no matter how old the case is,”; the minister said. “Journalist Aziz Memon’s murder case was solved and the criminals were arrested. I appreciate Karachi police chief Ghulam Nabi Memon, who solved the case and worked this one out as well.”

An anti-terrorism court in Karachi had awarded life imprisonment to four in Babar’s murder case while Faisal alias Mota and Kamran alias Shani, were given death sentences in absentia in 2014. Later Faisal alias Mota was arrested from Nine Zero, the headquarters of the Muttahida Qaumi Movement in March 2015, while Kamran alias Zeeshani Shani was on the run.

According to the Committee to Protect Journalists, “Babar was shot shortly after his story on gang violence aired on the country’s most widely watched broadcaster, Geo TV.”