HYDERABAD: An exhibition of posters based on suppression and violation of the female gender, also brought out the fact that the art scene in Hyderabad has been suffocated over the years.

Khuda Bux Abro of Poster For Tomorrow, who hails from Hyderabad, urged art institutions to bring their students to the exhibition which opened on Sunday at the Zafar Kazmi Art and Design Gallery in Sindh Museum .

The seven-day event, which was also organised in Karachi last year, was a rare and first of its kind in Hyderabad. It was held in collaboration with the Aurat Azaad organisation, featuring 100 posters of Poster For Tomorrow on the theme ‘Gender Equality Now!’

Gender inequality is often believed to exist only in some underdeveloped countries. But the women in Hyderabad who visited the exhibition of the graphic design posters found a reflection of their lives in the women of the ‘first world countries’.

“We hope to draw art lovers as well as the students of art and design who can learn from the world’s top 100 graphic designers,” said Abro, who was happy with the response on the first day. “This event is essentially for feminists who want equal rights for women.”

Sindhi writer and columnist Gulshan Laghari found herself easily relating to the posters.

“There is not a single poster which directly reflects our culture. Yet, I feel they all mirror our society and its women,” she commented. “I have come here to see how the artists from other parts of the world think about women. These pictures depict women’s conditions.”

She pointed to a poster of Mexico’s Moises Romero whose slogan read “He said he loved me”. It shows a man embracing a woman but his feet are seen trampling the woman’s feet. “It displays the fact that suppression is part of a man’s love for a woman,” she construed.

Benish Sahar, a visitor, was amazed to find how the artists, particularly in the developed world, perceived the rights and role of women in their societies. “The stigma of giving birth to a girl even worries mothers in Europe,” she said while looking at the poster of a pregnant woman, made by Greece’s Beetroot Design Group, who sat on a chair wondering if she was expecting a girl.

“The posters show us various forms of discrimination in different societies,” said Atia Dawood of Aurat Azaad. She lamented that in the countries where women are thought to have liberty, sexual exploitation and objectification is rampant, referring to the photo by Gustavo Morainslie, a Mexican artist, which portrayed such abuse.

But it wasn’t all about misery – writer and women rights activist Amar Sindhu saw the posters as a way of acceptance that inequality against women exists. “We can hope that it will become a precursor for achieving equality.” 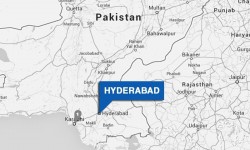