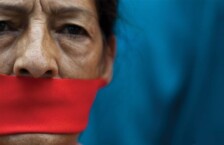 The first dimension is that freedom of expression gives liberty, though under certain reasonable restraints, to express oneself by speaking or writing. The availability of freedom of expression nudges one to create an idea or hold an opinion to express without any coercion. Only can expressed views be shared. Views that remain unexpressed are unshared, depriving others of the opportunity to discern.

Creation, expression and sharing of views embody a democratic society, the progress of which hinges on the ability of its members to question prevailing norms and traditions. Dynamism comes with change. For instance, to write a column and comment on a news article is freedom of expression. Conversely, not questioning makes society stagnant. Interestingly, eastern societies like Pakistan are ever ready to seek benefits from the west, but they themselves tend not to be dynamic. The reason is that rendering a society destitute of newness keeps the society conserved. The same factor makes society pander to the dictates of monopolies.

The second dimension is that freedom of expression entails the right to be heard and the conjoined right to participate in the debate. That is, the right to know and reach the truth is a significant part of the freedom of expression. In this dimension, those in power may see their power challenged. In developing countries such as Pakistan, it is still difficult to decide what one should say and what not.

Frequent changes in the office of the Finance Minister since 2018 articulate what crisis has engulfed Pakistan.

To meet the challenges of the given complex world, the free exchange of ideas and information is vital to reach plausible potential solutions. It is equally implausible to accept that certain views are indescribable or that certain forms of power are unchallengeable. The “sacred cows” phenomenon offers a major impediment. Nevertheless, the religious domain is changing. Modernism has swallowed fundamental Islamism. Rigid norms are also ceding space to inventiveness.

One reason for the transformation could be that the world is in a state of flux. Globalization has eroded local norms, nationalistic boundaries and ideological precincts. For instance, the rise of a non-white to the position of the Prime Minister of the United Kingdom (UK) is a lesson to learn about the transformation. What was prohibited in the past is permissible now. The UK had been left behind after the coloured Barack Obama’s rise to the Presidency in the United States in 2009. Two major democracies have shown that they have been transformed and that a similar future of accommodation waits for humanity.

The third dimension is the right to seek out information in order to express it. Without collecting information, one cannot express it. This is true, especially for journalists. In a developing country like Pakistan, journalists remain cautious of their safety in case they seek information that the state authorities tend to withhold. For instance, Pakistan failed to predict its economic meltdown. Years ago, ideology was everything, and then came the turn of politics. Now, the economy is everything. Frequent changes in the office of the Finance Minister since 2018 articulate what crisis has engulfed Pakistan. In reality, the Finance Minister is running the country. The rest falls in line.

Two areas consume the most economic earnings of the Pakistanis: first, debt servicing and second, defence. Hardly are there sufficient funds available for running the civil administration and launching developmental projects. For the financial year 2022-23, Pakistan has allocated PKR 1.53 trillion (USD 7.5 billion) to its defence budget, which is about a 12 per cent increase over the defence budget of 2021-22. On the other hand, high taxes are getting unbearable, as the country has been trying to stand on its own two feet. For the posture, the country possesses no experience.

The third dimension helps one to ask what funds are left to spend on the developmental sector: education, health, and infrastructure including road and rail transport networks and constructing dams. It is the right of every Pakistani to have access to clean water, clean air, nourishing food, and durable shelter, though decent work and fair wages are still a dream. Amassing resources in one section of society is injustice. The means should be made equally available to others, even to those who have no voice to raise. Similarly, education for kids is equally important, given the consciousness about quality of life being perceived.

The tug of war between the claimants of the defence budget and the deliverers of debt servicing is going on. The sufferers are the people of Pakistan, a country which has failed to construct big dams to conserve water to avoid floods. Life and vegetation are in jeopardy.

A developing country with an increasing defence budget may not find international finance donor agencies friendly. The donors may not press for lowering defence expenditures, but they impose conditions, which ask for reducing non-developmental expenditures, including defence spending. The squeeze has to be afforded by the tax-paying robots, the citizens.

Societies like Pakistan fall under the head of controlled societies. The holder of power abhors easing its grip. The behind-closed-doors phenomenon dictates its terms. The constitution is considered a mere compilation of pages meant for showcasing to the world the presence of law and regulations, which applies selectively. In short, freedom of expression demands that those who can represent the voice of the ignorant and the deprived must speak and write, and stand in solidarity with those who are sufferers and victims.