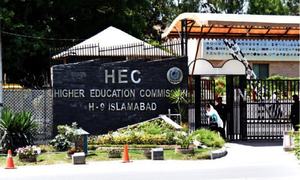 The scholarships would be available from next year.

The MoU was signed by French Ambassador to Pak­istan Martine Dorance and Chairman of Higher Ed­u­c­at­ional Commission (HEC) Dr Mukhtar Ahmed in a simple ceremony here at the residence of the French envoy on Sunday.

The French ambassador, in her remarks on the occasion, said the MoU would further cement bridges between the two people.

Higher education was one of the pillars of Pak-French cooperation and the MoU would give scholarships to those students who did not have sufficient means to continue their education.

A delegation of Pakistani educationists led by the HEC chairman visited France early this year, which was quite fruitful and after exch­ange of views it was decided then to further increase partnership between the two countries, she said.

Pakistani universities, she said, had also agreed to introduce new programmes in that regard and would open up information centres in Karachi, Lahore, Faisalabad and Peshawar to let students know of available opportunities in French institutions.

The French envoy said members of the PFAN were Pakistan’s ambassadors in France whenever they were visiting there. Similarly, they were French ambassadors while working in Pakistan. “You are the bridge between the two countries,” she added.

“We want to forge long las­t­ing relations between Fra­nce and Pakistan. We wish you will return to France as businessmen and as investors,” she said while referring to PFAN members.

She thanked the HEC cha­i­r­man for his efforts in promoting Pak-French cooperation in the field of education.

The envoy said after a very successful ceremony on the Pakistan Day in France this year, it was decided to organise a French Day in Pakistan next year.

Speaking on the occasion, the HEC chairman appreciated efforts being made by the French envoy, saying that she had infused a new impetus to the Pak-French relations, hence, ties between the two countries were growing.

He said a conference on archaeology would be organised in Lahore next year and another moot on Gandhara Art was being planned in France in 2018, which would help enhance cultural cooperation between the two sides.

He said Pakistani universities would set up Knowledge Parks in different campuses to promote cooperation between the two countries.