FPWF18 Day Two: A case of bad bridals on the runway

Fashion Pakistan Week Winter/Festive 2018 may have begun with the hope to introduce new trends and to showcase the ingenuity of the associated designers, but most of Day Two only proved otherwise. Gone were the ideas of providing market-friendly, cost-effective ensembles or the notion that winter/festive could be a space for impeccably-done pret and couture. Instead, the collections were such that they needed to be severely edited by the Council before they could even be allowed on the runway.

Amongst the designers showcasing on Saturday – namely, Wardha Saleem, Sara Rohale Asghar, Deepak & Fahad, Maheen Karim, Rano’s Heirlooms, Shahmeer Ansari, and Maheen Khan – only a few managed to keep it up to the mark and proved why the FPW still needs to function.

Day Two started off with Wardha Saleem, whose collection titled Chandbala explored the royal traditional craft of the Subcontinent. Keeping with her signature to create a spectacle around her collection, models sashayed down the runway as Mai Dhai performed in the milieu. However, while many create a display to drive attention away from the possible flaws, hers was a collection done right. Like always, it was Wardha’s use of the right colours such as greens, pinks and oranges along with the intricate use of materials like leather, which made Chandbala stand out the most.

Having said that, one also wished that the designer would give the same attention to her heavily-embellished solid colours, which remained underwhelming at best.

Playing with the European/French imagery, Sara Rohale Asghar promised a collection inspired by French royal heritage. However, what was delivered was probably the legacy of a few other brands like Elan, who we’ve seen do the same sort of embellishments before, and in a much better way. The mix of embroidery over metallics and pastels are nothing new to the market, and one wished that the embellishments were cut to half of what they were. And while one is at it, please say goodbye to the peplum for sanity’s sake.

The duo has been a part of the fashion industry – and FPW – for a while now and it’s high-time they broke away from producing non-cohesive displays and create a solid collection that can be called their own signature. Amongst a number of traditional menswear and a few designs for women, all that stood out in regards to innovative craft, were the organza jackets worn by the female models. The rest were nothing to write home about.

Inspired by the luster of jewels, Maheen Karim’s Lueur De Luxe was more a display of the designer’s experimental skills than anything made with the idea of market-friendliness in mind. The trouser-suits and dresses with huge repetitive three-dimensional embellishments and motifs on top were questionable. One just wished that the colour palette of tangerine, pinks and corals she chose to use were done in a much smarter way.

A staple of traditional old-world ensembles in Lahore – much like what The PinkTree Company is to Karachi – Rano’s Heirlooms went for their tried and tested format once again. Exhibiting a mix of traditional silhouettes and a regal colour palette of golds and silvers playing with whites, pinks and blues, Phool Bunro was a welcome collection to the runway. However, as attractive as the designs were, this was more like displaying off-the-rack work than creating something especially with a fashion week in mind.

Aiming to show a man’s journey from graduation to when he leaves his legacy, Shahmeer Ansari – who is a relatively a new name to FPW – tried his hand at experimenting with various designs for his collection, albeit missing the mark a little. Mixing traditional with the global norms of the fashion market, Beyond Generation managed to play with sleek cuts and also display a few complementing accessories with it. However, would one call this an innovative addition to the industry? That’s highly debatable.

After receiving a generous number of praise last year for her collection, The Lion and The Muse, Maheen tried to bring the same aesthetic back to the runway with the last collection of the day, Raw. However, while the former had its highs with bringing the gharara-saari hybrid into style, the latter remained underwhelming to the point of restlessness. A mix of raw silk silhouettes were pretty much all that was good, while the rest could have been done in a much better way. Truth be told, if any other designer would have done the same sort of collection, we’re sure it would have received major flack. 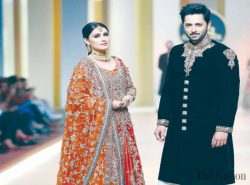