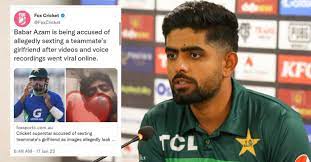 ISLAMABAD—Fox Sports Australia has removed a piece of unsubstantiated news regarding the captain of the Pakistan cricket team Babar Azam from its website and social media.

The news leveling severe allegations against Babar was based on a Twitter account of Dr. Nimo Yadav, which identified itself as a “parody account, athlete, research analyst, ex-Ranji player, fact-checker, IIT KGP.”

Dr. Nimo also deleted the tweet, saying it was based on falsehood and what he said was a satire. He offered Babar his apology and also provided to sue Fox Sports Australia jointly.

Others, however, demanded an apology from Fox Sports Australia.