A man and a married woman were shot dead on the pretext of ‘Karo-kari’ in Faqeer Muhammed Khoso village within the remit of the Qubo Saeed Khan police station, some 70 kilometres from here, on Monday.

After committing the double murder, Shahul Khoso surrendered himself to police along with the weapon he had used and confessed to have gunned down his daughter in-law Zameeran, 26, and Allahwarayo Khoso.

The Qubo Saeed Khan police registered an FIR against Shahul Khoso on the complaint of the father of Zameeran, Akbar Khoso.

He alleged that they had stormed into the house of Gulzar Khoso and killed the two persons.

In Jacobabad, a man and woman were killed in Mohammad Panah Brohi village within the remit of the Saddar area.

Sources said that Yar Mohammad Langho along with his other associates attacked Mohammad Waris, son of Dhani Bux Brohi, on suspicion that he was fond of his son’s wife, Hassan Bano. Waris offered resistance and survived the attack but one of his associates attacked him with an iron rod inflicting fatal wounds.

The armed men later went to the house of Yaseen Lango and grabbed his wife, Hassan Bano. One of them strangled the woman.

Yar Mohammad Langho surrendered himself and the pistol used in the crime before the police.

He made a statement at the police station saying that he himself killed both the persons for honour.

Later, the police went to the village and took the bodies in custody. A post-mortem examination was performed at the Jacobabad Civil Hospital before the bodies were handed over to their respective heirs.

No case was registered at the Saddar police station till late Monday. 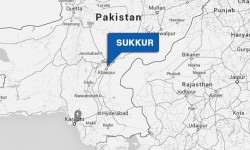 Journalists protest in Ghotki against kidnapping