For a free media 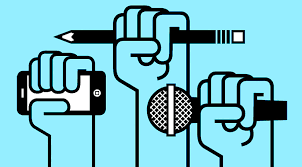 IN the face of the inflexible attitude of the government on the proposed media regulatory body issue, journalists’ associations have decided to hold protests outside parliament next week. Media organizations and journalists have been forced to take this step because Information Minister Fawad Chaudhry has dug in his heels on the proposed body without realizing — or perhaps despite realizing — that he may be triggering a vociferous campaign by all stakeholders who cherish the constitutional right to freedom of expression, and who believe in the sanctity of an independent media. The government is adding insult to injury by not even sharing the draft of the bill even though media representatives have been demanding to at least see the details of the regulatory authority.

If the leaked first draft of the bill is to be believed, the Pakistan Media Development Authority combines all existing media regulatory bodies into one and will have sweeping powers to haul up journalists and media organizations in front of tribunals that can slap them with stiff penalties, fines and even imprisonment. The proposal has justifiably elicited protests from media organizations, civil society bodies as well as opposition parties. All are united in condemning this move by the government and labelling it a brazen attempt to throttle the media. While the information minister — who now says this proposed body is his initiative, and his alone — is arguing that he will not back down, there have not even been discussions with the genuine representatives of media organizations and journalists’ associations, and it is incorrect to claim that the relevant people in the media have been consulted. It is alarming that the government is adamant to bulldoze this body through parliament without paying heed to the genuine concerns of stakeholders. Is the government, and its information minister oblivious to the fact that since 2002 over 70 journalists have lost their lives in the line of duty? Are they unaware that the banned TTP has recently issued a stark warning to journalists regarding their coverage? It is such issues of safety and security of media workers that should be of the highest priority for the government which, instead, is obsessed with trying to gag the voice of independent journalists and media organizations. The proposed regulatory body must be resisted with full force by all those who cherish a free media and the crucial role it plays in strengthening democracy and holding to account those in power.