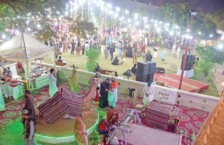 HYDERABAD: A first-ever ‘hunarmand melo’ (craftsmen fair) under the aegis of Sindh Indigenous Traditional Crafts Company (Sitco) began at Sindh Museum here on Friday to bring famous handicrafts — identity of Sindh — of different artisans under one umbrella to promote the province’s traditional handmade products and clothing.

“If it picks up momentum, we will then be doing it once in a month” said Hamid Akhund, Sitco’s executive secretary and one of the trustees of Endowment Fund Trust (EFT). “Those who are interested in purchasing handicrafts can get [them] from artisans here directly as the role of middlemen has been excluded through this facility,” he explained after listening to a folk artist, Addo Bhagat, in the lawn in museum’s backyard.

The family festival would continue till Sunday from afternoon to 8pm followed by a musical night in Sindh Museum.

“The ceramics which [are] the identity of Sindh [are] disappearing and only useless stuff is marketed. The same goes for maroon coloured ‘teli ajrak’ (dipped in oil) whose ingredients are not the same as always used in the past,” said Mr Akhund. “Artisans told me that the import of maroon dye from India has been stopped which they use in ajrak printing and now they want it to be imported from Bangladesh,” he said.

Sitco had arranged the event ‘Karachi Haat Crafts’ in 2018 on identical lines. The festival was inaugurated by only surviving craftsman of sousi and khaddi (handloom) from Hala, Karamullah Memon, along with Sindh culture department secretary Akbar Leghari, Hyderabad Divisional Commissioner Abbas Baloch and Hamid Akhund.

Around 150 artisans are taking part in the festival to sell their handmade products though most are expensive given the present price hike and ever-increasing inflation in society, but still seem quite popular among people. Sitco has absorbed lodging and boarding expenses of artisans and they have been given stalls free of cost.

Artisans dealing in ‘teli ajrak’, tiles and ceramics, silk products and various embroidered products right from Kohistan to Badin to Thar’s desert are on display in this women-specific festival. “Women and craft lovers will be taking an avid interest and Sitco will be making it regular feature fortnightly considering people’s response,” said Sitco director Shakeel Abro. Different stalls are set up on all sides of lawns. Two replicas of Thari chaunras (huts) are also built in the premises where elderly women promote their embroidered and artistic work on clothing.

Women’s most common three and two pieces — kameez and dupatta — of lawn and silk suits are available from Rs2,500, Rs7,000 to Rs10,000 and Rs14,000. Clothing with embroidered lungis, ajrak and other handicrafts remained dominant at the festival as young girls and elderly women from well-off families took rounds of stalls and enjoyed traditional food on the festival’s sidelines, too.

“It’s a pure dyeing work with natural block printing,” said Matiari’s artisan, Shafiq Ahmed Soomro. “Women like two-piece suits on silk and cotton fabric on ajrak. It can be as cheap as Rs2,500 and as high as Rs14,000. I’ve been taking my products to festivals like Lok Virsa and also sell locally in Matiari,” he said.

Mr Akhund said that those who have a knack for identifying genuine teli ajrak with block printing would feel comfortable to buy it for Rs10,000 as at some other urban outlets it could be as expensive as Rs25,000. “So … we are trying to promote these traditional crafts among people so that they can directly buy it from artisans instead of retail market,” he said.

Older women of the Meghwar community of Badin’s Kadhan area Ms Assan and others are there to sell their handicrafts in one of the Thari chaunra. Her counterpart Ms Marwan Meghwar from Mithi was also there in the second chaunra with different products. Elderly Assan and Marwan are running training centres in Mithi and Badin to transfer their traditional art to the next generation. Twenty trainees who get stipend are attending one-year course in those centres.

Rahiba smilingly introduced her craft of baskets, table sets and other stuff made of date palm trees’ branches and leaves. A variety of colourful products were on display at her stall. Khairpur’s Sahib Dino was busy in his khaddi work of sousi fabric mixed with cotton.

Recipient of the presidential award 2015, Fatima Mengal from Khuzdar, set up her stall of Balochi embroidered frock, wallets, purses, bracelets, keychains, bangles and trousers. “A three-piece Balochi dress costs between Rs7,000 to Rs10,000,” she said