Fans expressed their love and gratitude for the late actor’s work, stating that she was the best among the crop of artists during her time. They also stated that Ara was the most famous TV artist as she was responsible for entertaining a whole generation during her career.

Although a year has passed, the love fans have for her has not died down. Admirers still consider her one of the biggest TV stars of Pakistani entertainment and still cherish her famous roles.

“Nusrat Ara was the name of a whole era. How can we forget such an amazing actor? She gave her best days to this industry and thinking about her still reduces me to tears,” senior stage and film star Shiba Butt shared with The Express Tribune.

She continued, “Nusrat Ara was living a a hard life to the point of her having to resort to begging. Although the government did end up taking the necessary steps for her betterment, it was not enough. I hope that nothing like this ever happens to any other artist from our industry.”

Ara passed away on October 14, 2017 aged 53. She was born in Karachi back in 1964 and later moved to Lahore to pursue acting. The star rose to fame in the 90s with hit the TV drama Ainak Wala Jin, which saw her essay the ever-famous role of Bil Batori.

Although she played a negative role on the show, her acting was admired by numerous viewers. However, the end of the show was followed by Ara’s health deteriorating. She suffered from various illnesses and her life soon took a turn for the worst.

Details provide that she moved into rented accommodation where she was living a “miserable life”. This eventually led to her demise. Nonetheless, the news of her passing came as a shock to many fans.

The day of her death witnessed a special stage performance titled Ainak Wala Jin carried out at Alhamra Hall. Her co-star Haseeb Pasha, famous as Hamood Jadugar from the same drama, had spoken on various aspects of Ara’s life. The performance was staged in collaboration with Alhamra Arts Council and special invitations were sent out to the public in this regard, resulting in a packed theatre hall; full of both adults and children.

“This is a sad day for all of Nusrat Ara’s friends, colleagues and fans. It saddens me to say that we will be performing Ainak Wala Jin today on stage without Nusrat Ara,” he said earlier. “Although many of our colleagues are no longer among us so it is very sad to have seen Nusrat Ara’s leave too.”

“She regularly visited Alhamra Hall in the last months leading up to her death. She loved watching the performances,” Pasha added. For as long as I am alive, I will make sure to organise a yearly event in her loving memory. Her wonderful public services cannot be matched and I would like to honour her with an annual event.”

Butt also lauded Pasha’s efforts. Speaking of the play that was held yesterday, the artist said, “I want to pay a tribute to Haseeb Pasha who remembers Nusrat Ara on her anniversary and staged this performance.” 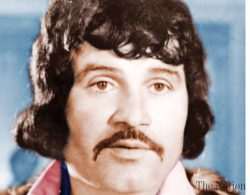