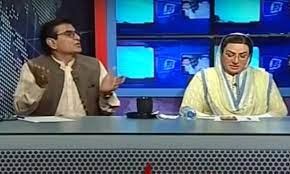 Special Assistant to the Punjab Chief Minister Dr Firdous Ashiq Awan made headlines again on Thursday after footage of her getting into a physical altercation with PPP MNA Qadir Khan Mandokhail went viral on social media.

The incident occurred when the two appeared on Express News talk show, Kal Tak, hosted by senior journalist Javed Chaudhry. What started as a discussion about the government’s performance and excessive load shedding in parts of the country, turned into a shouting match between the two over the recent train collision in Sindh’s Ghotki district which claimed the lives of more than 60 people.

Things started to become heated when the PPP leader mentioned Awan’s comments about the train tragedy; in a press conference shortly after, she had allegedly said that “by the Grace of God” this was the first train accident during the PTI’s rule.

“Your statement was akin to pouring salt on someone’s wounds,” he said, to which Awan claimed that her statement had been misconstrued. From there, the two continued to butt heads as the host and PML-N’s Uzma Bukhari watched on.

“Where was your chief minister?” yelled Awan as Mandokhail shouted back, asking whether the federal or the provincial government was responsible for the railway. However, the situation escalated when Mandokhail brought up the corruption allegations against Awan.

“Look who is talking, the one who is bathed in corruption from head to toe.” she said.

“What about you? You were a minister, didn’t you do corruption with buses?” Mandokhail hit back.

“He is lying. Prove your claims. I will file a defamation suit against you. Stop spewing nonsense,” she said, slapping the desk. The two continued to yell over each other as the host quickly cut to a break.

But it was not the talk show that caused the SACM to once again trend on social media. Shortly after, a video clip surfaced on the internet showing Awan physically attacking and slapping Mandokhail.

In the video, the PPP leader tries to grab her arm to defend himself. However, other people present on the set quickly intervene before the situation escalates.

As the video started circulating on the internet, #FirdousAshiqAwan started trending on Twitter. Many netizens were quick to point out that this was the second time the government official had been caught “misbehaving” on camera, pointing to an earlier incident with the Sialkot assistant commissioner.

In response to the backlash, Awan took to twitter to defend her actions. “The picture being painted about the argument with Mandokhail during Javed Chaudhry’s TV show highlights only one side of the story.”

She claimed that “one-sided” propaganda was being carried out as the video clip did not include the vulgar language used by the PPP leader against her and her late father.

“Such rude individuals have nothing to do with politics and ethics. These people are a blemish on the face of society and politics,” she said, adding that action will be taken against Mandokhail’s conduct. “Express TV should release the full footage of the incident.”

In a separate video statement, she reiterated that the PPP leader had used vulgar language against her late father, while also threatening and harassing her. “I had to take this step out of self-defence,” she said, adding that a “selective” video had been leaked.

She added that she would consult her legal team to file charges against the PPP leader.

Meanwhile, the PPP MNA said that he was ready to forgive Awan if she apologised for her actions. In a statement, Mandokhail said that he did not use abusive language against the SACM and could not even think of doing such a thing.

“Considering taking legal action against me instead of apologising is pure stubbornness. I also have the right to take legal action,” he said. He added that he would decide whether or not to take action against Awan after consulting with the party leadership.

“The women in the party are furious over Awan’s conduct,” he said, adding that she has also fought with people on talk shows in the past. “She grabbed my neck after the show ended when I reminded her about her corruption,” he said.